Just a couple of quick snapshots of what’s going on in the sub-i planters!

Actually, a comparison of the three Sub-I (left) vs two conventional planters (right): 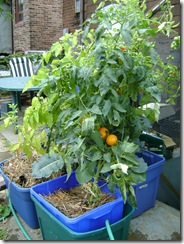 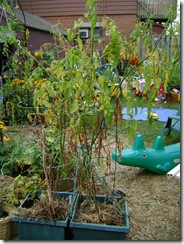 Keep in mind that, as with all my garden experiments, this is not a well-set-up or fair test.  I didn’t use the same types of tomatoes, for example.  STILL, I think you can get a very clear picture of the overall health of the plants!

This wilty thing happens to all my conventional-container tomatoes by this time of year.  I could probably improve their immensely by watering more regularly (the watering spikes aren’t doing the entire job, apparently) and even fertilizing from time to time.  I did mulch the surface of all the planters with hay, which adds trace nutrients, and also conserves a bit of water.

However bedraggled they look, the vines in the conventional planters are both producing fruit which is well-formed and tasty.  Here’s an Ildi tomato from the left one: 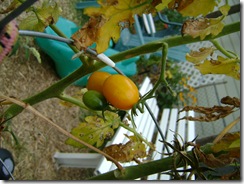 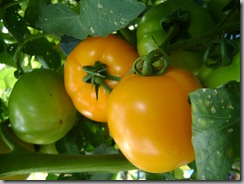 These have been a bit of a mystery to me!  Too lazy to read back to previous blog entries, I have been wondering if these are supposed to be yellow, because they are showing no signs of progressing beyond this colouring.

So I just checked now, and according to this entry, it’s another Ildi.

Oh-kay… yes, it is YELLOW, but that’s where the resemblance ends.  I have many Ildi plants growing (somebody gave me the seed free, too late to start seeds, but she said it’s very early, which is true), and the fruit is all egg-shaped, bright golden yellow and very sweet.

Guess I’ll just have to use the squeeze test to see if these are done and then bring them in to try over Shabbos. 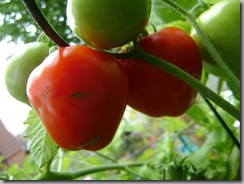 Here are some from seed I saved from some Roma type tomatoes from the Children’s Garden… obviously, they haven’t quite come true.

They’re a weird Delicious-apple shape, and still quite hard despite the deep-red colour.  I’m just hoping they taste okay…