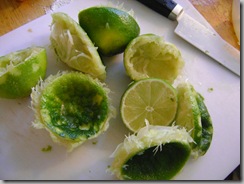 The limes are for tomorrow night’s Lahm Pah (aka lime pie, but you have to say it with a southern accent!).
We’re supposed to be eating at my mother’s after the fast, and I know for a fact that she invited at least one of my sisters, but when I spoke to her today, she sounded a little mystified that we might want food.  And not just a little food; I figure we’ll probably want a lot of food!
She said she had a couple of packages of blintzes and some bread in the freezer.  I suggested gently that we might need a bit more.  So I bought Dempster’s bread and some extra blintzes.  She’s providing tomato soup.
As for tonight – we’re eating alone, as usual: