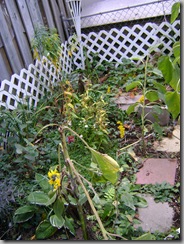 Even as the garden falls slowly into autumn disrepair (and my neighbour’s with the great garden does not, a reminder that disrepair is not inevitable), there is almost always one thing going right – decay.
I do realize that things will pretty inevitably decay in a garden with or without my help… however, I did help the contents of the full right-hand compost bin along in two ways.

One, I grew a cover crop on it for a few weeks… which may or may not have done any good, but it felt good to do it.  Plus, I have lots of extra seed, so hopefully can cover-crop the SFG beds if I have time before frost.  (what with Sukkos coming, maybe not!) 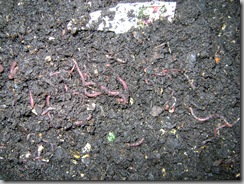 And two, earlier in the summer (July?), I introduced some “spare” red wigglers from the worm bin.  Just a few, mind you.  And then, the other day when I turned over the almost-finished compost, I found a bazillion of them!  YouTube video here – not for the squeamish.

To be entirely fair and honest, I ALSO found lots of red wigglers in the compost at the end of the season last year … even before I had a worm bin!  I have no idea where they came from last year.  And this year’s could, therefore, not have anything to do with the worms I added … or they could be their grandchildren!

Supposedly, red wigglers (unlike the brown night-crawler type) cannot survive the winter here, so can only be obtained by mail-order from worm-composter dealers (but don’t people also use them to go fishing?).

In any event, I figured adding more worms could only speed up the process of decomposition, minus a few that get shredded every time I stir the pile.

Speaking of the worm composter, it is definitely moving inside for the winter after Sukkos – before the worms freeze.  I guess I should sort it and start things off nice and clean in there for the season, too.  Ugh.  Definitely not my favourite garden task… but worthwhile because you get all that great compost!