We have a playroom?

Yes, and here's evidence:  a picture of the kids, actually playing in it. 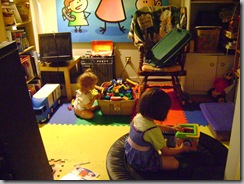 This is the "after" picture...

I spent an hour or so this morning straightening it up.  I'd been dreading the task, but actually, it wasn't too terrible.

Many, many, "oh, that's where..." moments as we rediscovered old toys that had been "put away" in the basement.

Did not find the box of regular-sized lego (where could it have gone???), but I did consolidate a bunch of "junior" lego that had been floating around the house.  As you can see, it is way more than two little kids need.

These pics were taken AFTER I spent a few minutes shaking the box, breaking linked bricks apart, and doing everything I could to make enough space in the box... the lid finally did snap on, barely, and it's bulging significantly.  Still, we have such COOL lego.  Not just regular pieces, but trains, cars, wagons, even a boat and a tricycle. 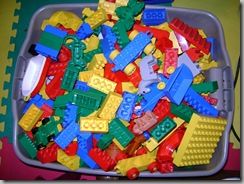 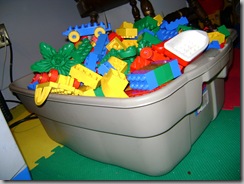 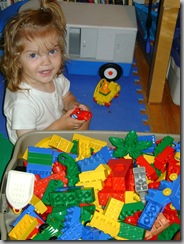 Hooray for Value Village!  Almost this entire stash was purchased $1.99 at a time over several visits (ok, perhaps dozens!).

The rest of the basement is still a pit.  So much stuff to take to Value Village, and still the huge sewing area to tackle.  The playroom was really the easiest of it, but at least if I do decide to clean up the other areas, the kids will have somewhere to play while I'm down there...

(reposted because the pics weren’t showing up, for some reason)