The trash day to end all trash days…

Inspired by a friend’s hint that today, the day before the first trash day after the strike, is going to be a big trash-pickin’ bonanza, I drove around all the best parts of the neighbourhood looking for… as I told Naomi Rivka, “things that people are finished using that they want other people to be able to use.”

Anyway, I guess I was hoping for a carriage of some sort, which was not to be.  Disappointing.  Not that I need another one, but I wouldn’t mind trading up the Pliko for another Maclaren…. or better.  Could happen.

It is about half again (or more) the square-foot play area of our current pool, with a nifty hose attacher that sprays water on the slide to make it uber-slippery.  The slide is more curvy, also; less babyish, in my opinion.

Here are both kids in it – plenty of room for friends to come and play, as you can see! 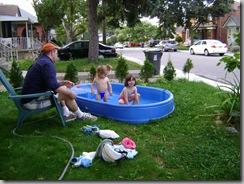 Just for comparison, here’s our current pool with Naomi in it, last summer:  looks kind of dinky in comparison! 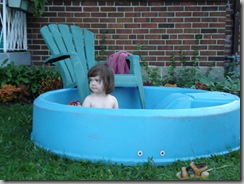 Anyway, I am going to wait to see if a) the “new” pool holds water, and b) it’s easy enough to empty and move… and then I will pass along the round blue pool if the new one meets both criteria.

The plug is missing, but the drain’s been well-covered with duct tape.  For what it’s worth, the round blue pool actually came with its plug, but it has never fit, so I had to do the duct-tape thing on it also.

The owner of the new pool came out and saw me taking her stuff – it’s actually a house where I have scavenged much good stuff in past, including, I believe, the Bertini itself.  Anyway, she was happy we were getting the pool and said, “my boys had a lot of fun in that thing.”

So it has a happy past, I guess.  No drownings, no ghosts.  As with used carseats, you never know with trash finds.