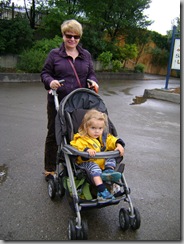 How happy this picture makes me, on how many levels.

This is my mother-in-law – Mary, the gardener (among other talents!), looking fabulous, as always, and braving the zoo in miserable weather with me, Naomi Rivka and Gavriel Zev.  The older kids were off with their grandfather, so it was just the four of us – two of whom aren’t technically related to her.

We know a family where the father has two older children, divorced and then remarried.  He has two younger children now, and the big kids are with them half the time.

And I thought, "how sad."  They're all in the same family, right?  At the very least, as far as the kids are concerned.

It meant so SO much when Jeremy emailed after Naomi was born.  He wrote "mazel tov on your new Naomi," and it must have taken so much for him to do it.  I hoped I could always be so gracious where his life was concerned.

One time, a very long time ago, maybe when YM was 4 or maybe a few years older, Jeremy told the kids he was planning to move to Toronto.  And the first thing YM told me was, "won't that be wonderful?  Our father... and YOUR BEST FRIEND!"  And I thought, there is no right way to divorce someone, but, again, at the very least, it meant a lot that the kids felt like we were best friends, felt that their family will always be peaceful and whole.

I emailed her tonight to thank her for being in my pictures - and my kids' family.  Family is what you make it; I’m more convinced of that each year.