Did I mention I’m in love?

Garden magazine, Shabbos.  Okay, note to self, do not read garden magazines on Shabbos.  They make me lustful.  And there it was:  Musa acuminata “Siam Ruby” – a big red banana.  The garden magazine described this thing and I fell in love.

Ten, today, at Plant World’s annual 40% off sale – well, I spotted ONE left on the shelf.  (okay, when I looked again, there were two… that’s not the point!).

It has deep-red leaves with splotches of chartreuse.  Okay, it looks a bit like a canna, but it’s not… it’s a BANANA.  Bananas come from one of two geni – musa or ensete.  I believe the most common banana, the ones we eat, are called musa basjoo.  Mine is closely related, but apparently flowers very rarely and will likely never bear fruit.  It can also grow from 6-8 feet, given the opportunity… which it will likely never have here. 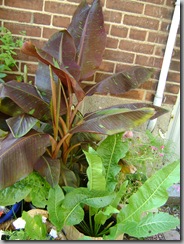 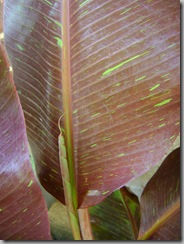 And here it is in my very own driveway…!  I wish I did have two, but perhaps if it thrives, I can dig one out and pot it separately next year, for the other side of the door (there are many stems in the pot but I don’t want to mess with it this year, as it will not have enough time to establish before I have to move it indoors).

Meanwhile, I’ve tried to group it with other attractive foliage plants (mostly the horseradish, which is thriving, and - in my opinion - gorgeous), but it dwarfs everything I’ve got.

Other miscellaneous purchases at the Plant World sale: 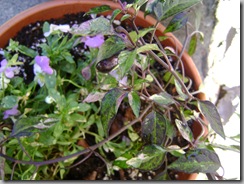 They were selling off “Calico” purple pepper plants for 99 cents, so I bought three (anybody want one?).  They produce stumpy, round-looking purple fruits and the leaves have purple and white variegation.  Very pretty!

I found two plant pots in the trash on the way home and one had some purple and white pansies still growing in it, so I stuck my purple-and-white pepper in with the purple-and-white flowers.  I think it’s kind of pretty… and who throws away a pot with flowers stll in bloom???

This picture was taken at absolutely the least-flattering time of day, with super-bright light hitting the neighbours’ white stucco wall and then splashing glaringly all over the plants.  I’ll try to get a better picture tomorrow morning. 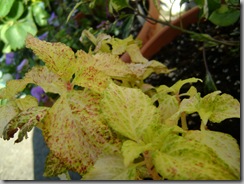 Plant World also had this mostly-white Coleus called “BiPolar By Golly.”  What a stupid name!  It’s one of Hort Couture’s 20 top plant intros for 2009, which I guess makes it hot, but again, with our family having been touched by mental illness, I can only say again, what a stupid and poorly-thought-out name.

It is a gorgeous plant, though, and this picture really once again doesn’t do it justice.  It’s a sun coleus, and I actually just plunked it into the other curbside pot with one of the “Calico” peppers.

Only two other purchases, both on the “want” list for a while.  No pictures yet, sorry!

1)  Hakonechloa “Naomi” grass… it’s an all-bright-green flowing hakone grass for sun or shade which turns purplish in the fall.  I’ve stuck it in the front bed but it may be too dry there.  I already have one regular hakone there which isn’t dying or thriving; we’ll see what happens next year.

2)  The other was a “Fanal” astilbe, which  I even had a spot I was saving for it, so that one was definitely not an impulse purchase.  It’s an ideal astilbe spot, so I’m kind of excited… very shady, lots of moisture. 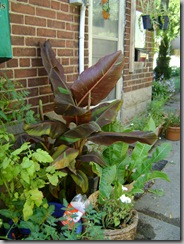 I had a lot more in my cart, but the cost of the banana made me put a lot of stuff back, including another “ghost”  fern, some groundcovering chamomile and one sad-looking but relatively inexpensive at 40% off toad lily.  Sigh… we can’t have it all, and did I mention, I am utterly in love with this gorgeous banana???