They are light-deprived, nutrient-deprived and everything is doomed.

But I love them anyway! 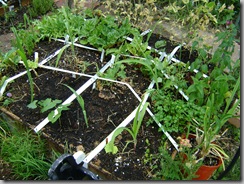 Corn, beans and assorted melons are slowly, slowly starting to crowd out the first generation.  However, I cut back the leaf-minered chard to see if it would grow nice, unminered new leaves and sure enough, it’s actually looking quite edible, there in the back row.

The peas were starting to die back, and I was getting ready to pull them out, except the ones I’m saving for seed, but now, because the weather is cool, some are starting to bear again.  Aargh! 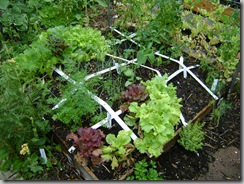 All that lettuce!  And now that it’s been hot and some bolted, I’m scared to eat it!  I bought some clearance cabbage and brussels sprouts seedlings at Fortino’s Garden Centre closing (2/25 cents), so I will try to pull out all the lettuce and start over with those cool-weather crops.  We shall see!

Carrots are coming along decently; better than mine ever have, anyway.  In the back row where you can’t see them, four tomato plants are actually starting to bulk up.  But no sign of flowers or fruit on those ones, yet.  My container tomatoes always do WAY better, probably because of my impromptu homemade soil mixes…and because they’re situated in sunnier areas of the garden.  :-( 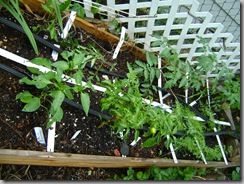 The back row tomatoes are finally growing!  As my mother pointed out, “too late for them now anyway.”  So we’re not going to bother putting up the trellis for them.  If they happen to grow tall enough to get floppy, I can always sneak onto the neighbour’s property and tie them (with something soft like used nylons) to the chain-link fence.

The peppers in the front row are doing okay.  Just okay.  Grr.

And the carrots are runty and bitter.   I pulled one and it was forked.  But Naomi loves them and nibbles them right out of the ground (I rub the dirt off first).  I love the fuzzy foliage, but am just about ready to declare myself an utter failure in the farmer business. 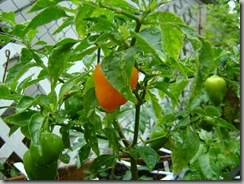 The highlight of the whole SFG thing right now is my long-suffering overwintered pepper plant, which is finally enjoying a bit of the warm weather she cherishes.   Love that orange tint – so tempting to pick it, but I think I’ll try to let it go all the way red.

There are four peppers ripening; one orange, one yellow, and two green so far.  This seems to be about as bit as they get.  I just hope it doesn’t taste awful or disappoint us in some other way, as so much garden produce has so far this year…

Blah.  What a downer!  But don’t worry; my next post will be about the sub-i planters, which are doing great!!!