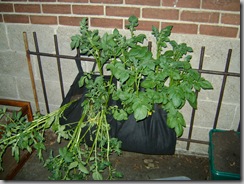 So a few weeks ago, one of the hanging grocery potato bags flowered, and then the vines got very long and drooped.

So I waited, and the vines got droopier, and finally, on Friday, I thought, “there must be some potatoes there by now.”

Not counting a few little pebble-sized spuds, here’s what I got from the entire bag.  Nice foliage… almost zilch underground.  :-o 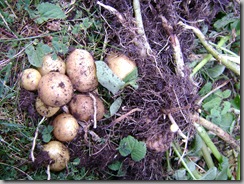 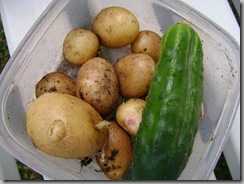 The cucumber (in the right-hand picture) was disappointing also.  I was lazy and didn’t check which type it was (marketmore or Straight 8) but it was unpleasantly bitter.  I was surprised, because the cucumbers we’ve had from the garden in past were always way sweeter than supermarket ones. 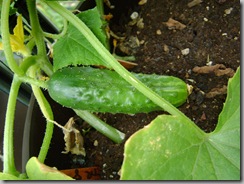 Two explanations I thought of:  despite the fact that the cuke was growing in a self-watering hanging planter, I was perhaps a bit inconsistent about water.  AND I guess I didn’t really wait for the cuke to ripen fully.

BUT I don’t think those could be the main reason.  Because I have watered inconsistently before and still gotten cukes.  When there’s too little water, they just fall off, they don’t ripen nicely and look as cute as this one does!  And even when I harvest them underripe, they usually taste okay.  I mean, what are pickles, if not underripe cucumbers?  (hmm… or are they dwarf cucumbers?)

I am consoling myself by thinking that cucumbers are (I think!) native to the middle east and would probably grow happily in a self-watering planter, even on a balcony, in Israel. 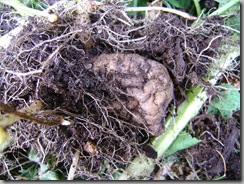 To top off all this disappointment, here’s the yuck part about growing potatoes.  You’d think the original “seed” potato would somehow manage to tastefully disintegrate into the soil:  ashes to ashes, etc.

Maybe sometimes it does, but mine usually just hang about turning to MUSH.  They wrinkle, they shrivel, but inside, they remain, essentially, liquified potato.

How do I know?

Because each year, I manage to plunge at least one finger straight into the heart of one in my desperate attempts to find nice, fresh, yummy new potatoes.

Somehow, I will put all this disappointment behind me.

I still have quite a few more cucumbers coming, plus one hanging grocery bag and two buckets full of potatoes, which are maybe doing something a little more than this grocery bag did.  Hey, maybe I’ll complain to the President’s Choice people!

Oh – the big plus of the hanging-bag planter is that it WAS indeed easy to empty (just dump it out somewhere you want a bunch of compost!).  And then it was super-easy to sift through the compost for new potatoes.  Maybe it would have been easier if there were more than SIX potatoes in the entire thing.

Drat.  Perhaps I am doomed to never harvest a satisfying quantity of delicious homegrown potatoes.