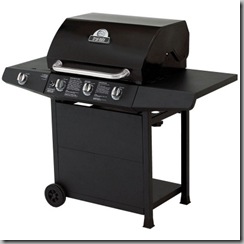 Well, it’s not the fabulous Weber Genesis that my mother’s neighbours have, but I think this is a pretty respectable “Q” for her, if I say so myself.

I am SO happy I didn’t just buy a gift card as I was debating!

Because this puppy was NOT easy to buy… we drove to one Home Depot, fairly close, then another, a bit further.  Anyway, five stores, four and a half hours after we went out and dozens of idiot salespeople later… we schlepped this thing home in its box victoriously.

Ted’s outside assembling it now. 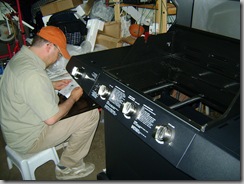 They had a low-end one for $199.  This is the higher-end model, marked down at the end of the season.  (I’m not going to say how much because my sisters may read this and they are supposed to only chip in what they can afford.)

It’s a “Broil Mate”, which is apparently the cheesy low-end name Broil King uses in order to cut a few corners and sell at Big Box Store prices.

Ironically (in the Alanis Morrissette sense?) (how many r’s, s’s and t’s are in Morrissette, anyway?), my mother bbq’d for us tonight… yummy homemade hamburgers.  Her BBQ was working just fine, canister set a bit aside so it wouldn’t explode when the flames leap out the bottom.  And I was thinking, maybe she doesn’t need a new one at all…

I hope she does, too.

Speaking of “afford”… one relative I approached who I thought for SURE would contribute declined rather abruptly, claiming to be “tapped out.”  Not even TWENTY BUCKS??!?  It’s not a distant relative, either… and it’s on her side of the family.  It is someone I thought for sure would come through for my mother, especially in this awful year for her.

Maybe they are planning an even bigger, better surprise for her!  (am I naïve, or what?)