More spinch - only one grew! :-o
More tomatoes - as if I didn't already have enough
Beets
Cukes
Watermelon
Canteloupe - these last 4 don't transplant well, I know, but especially with watermelon, I'm not taking any chances with our growing season.
Annuals - no idea what I've got: Alyssum for sure, a bunch of others.

They are all going into my Burpee Ultimate Seed Starter, which I foolishly bought from the U.S. and then discovered they stock for $20 at my friendly neighbourhood soulless Lowe's megastore. Unlike the Lee Valley self-watering starter, which I think holds 24 seedlings, this one can do 72. The cells are smaller, but I figure for last-minute starts like annuals that won't need to grow on for long, it should be perfect. 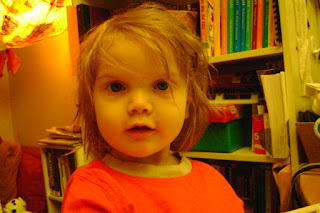 Sure doesn't look sick, does he???

Now I have a headache.

Now I am thoroughly paranoid that I'm going to come down with whatever this is.
Bad, bad, bad.
Or that Ted will.

The big kids, not so terrible. They can pretty much look after themselves, with a bit of tea and coddling.

It used to drive me crazy that my mother would Lysol the heck out of the house when someone was sick. I hate the smell of all kinds of Lysol, to this day.

But on the other hand, there is a lingering smell around here right about now that really begs to be eradicated with something...
Then again, Ted didn't mention anything when he came home from work (at 12:45!), so maybe it's just in my nostrils.
Ew.

Major repotting-slash-rescue effort underway downstairs this evening: got all the windowsill coleus and drying-out peat pots into larger pots with soil. In between the baby's vomiting. Eventually, I gave up and sat upstairs so I could hear him when he first made a noise, rather than when he got to full-scale screaming. That way, I managed to catch things before he made a major mess again. Only had to change the sheets twice...

He was so incredibly cheerful in the in between moments. The picture above was taken as I was holding him in my lap, and catching up on blog-reading. The only problem is, he was feeling incredibly kissy and kept wanting to smooch my face or hand. Note to self: sterilize cheek and fingertips before eating anything!!!