Here's what I found this morning 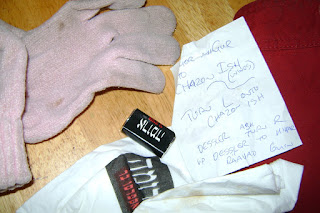 Since it was a relatively warm and rainy-ish day and I wanted to take Gavriel Zev to shul in the ergo, I decided to wear my red Eddie Bauer jacket, the one I brought along to Israel.

I reached in to empty out the pocket and found my pink gloves, which have been "missing" - I guess not so much missing as just searched-for in the wrong places - along with unintended mementoes of my last moments in artzeinu hakdosha.

~ Two serviettes ("mapiot") from our stop at Aroma espresso the morning we went to Bnei Brak to see my father's uncle.
~ One spare chocolate ("od shokolad") I begged the Aroma people for because YM told me he hadn't gotten one with his hot chocolate ("shoko cham" - okay, now I'll stop) and I kept because it tutned out he was just joking
~ Directions a kind lady in Bnei Brak gave us on how to get to Uncle's house on Rechov Raavad.

The gloves smelled a lot like chocolate. I was hoping they'd smell a little like Israel, but no, just chocolate.
I cried anyway.
I cried in shul thinking about Purim coming up, and because I tend to not cry when I'm busy and moving about and then when I sit still in shul for more than twenty seconds, it sneaks up & hits me like an out-of-control flying bird.

Coming up it is... on Tuesday, we'll have our first Yom Tov without Daddy.