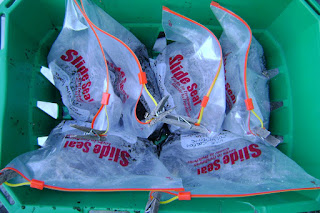 Today's great weather - hovering around zero, but I swear it was up to 4 in the sunshine!!! Got me inspired to start wintersowing again. I did three types of columbine (actually four, but I mixed up two red/white types) - Lime Sorbet, Red Star, and the orange/red ones from my own front garden. Plus three types of milkweed - white (ice ballet), an orange/red mix and asclepias curassavica, which looks beautiful, though not hardy to this zone apparently (but has been successfully wintersown in this zone, according to the database at wintersown.org. 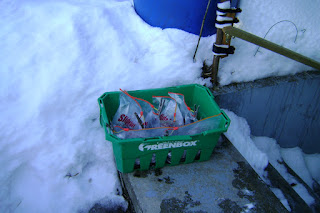 Anyway, I decided to try out this technique for winter sowing in a baggie. Pretty easy, except for a bit of spillage tipping the soil from the big bag into the baggie.

I'm doing it this way because the main problems with winter sowing last year were a) the soil wasn't deep enough, and b) come spring, the lids started blowing around and the containers dried out. The baggies seem to solve both problems nicely, with the main drawback of being hard to move around.

I have immobilized them in this ratty old broken-down Greenbox, and don't plan on moving them too much. No lids to lose, and you can't see here, but I filled the baggies about 1/3 full, so there shouldn't be much problem with depth when it comes time for the plants to sprout and grow roots.

I was appalled to discover that the white milkweed packet only included about four or five seeds, and then I dropped one while tossing them onto the soil, so there are only 3 or 4 seeds in the baggie. Oh, well... if it sprouts, I'll have nice white milkweed... otherwise, I'll have some spare soil to toss on the garden.

It's WalMart soil, which now I don't really trust, but it's hard to find good, cheap potting soil in the depths of winter...

G'nite! Ted's waiting for me to watch the rest of Office Space, plus fold laundry because tomorrow, I'm off to the DENTIST.