Since it's still winter... 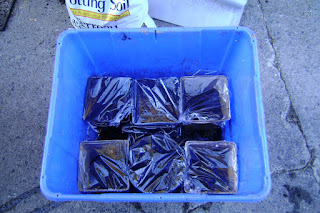 And yes, those are my marvellous could-have-been organic tomatoes sitting in that potting soil.

These are simply reused nursery pots that I had sitting in the garage, filled 1/3 with soil and covered with Saran wrap and an elastic band. I really hope the weight of the snow we're getting today doesn't crush the tops, as they are kind of flimsy (I peeled back a c 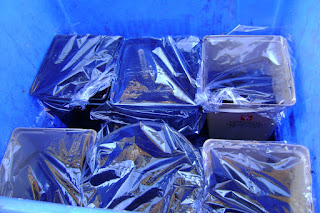 orner on each pot for ventilation, which won't help things any, stability-wise...).

I'm a little leery of doing this with tomatoes, but I used saved seed from last year, NOT the precious new varieties I have been hoarding and waiting to plant indoors. I figure they'll either grow or they won't (deep, right?). And if they grow - tomatoes! Who doesn't love tomatoes?!?

The wintersown.org website says these sprout a little later than some other wintersown varieties, and later than indoor tomatoes, obviously, but have a big lead in terms of vigour and lack of diseases like damping-off. Let's hope for that, as it's been the bane of my seed-sowing life the past 2 years I've been starting seeds...

~ Pea soup from a mix but with real chicken bones in the water!
~ Superstore chicken
~ Mashed potatoes
~ Roasted carrots

Ted's working late and I am taking Naomi to swimming lessons, so we'll all eat together later on (okay, probably not Ted unless it's very late). That means I can snack because it won't ruin my appetite! And let the kids snack!

Ted told YM he could ride his bike this morning, thinking it would be another warmie like yesterday. Now I am looking outside and it's solid snow, snow, snow - temperature is just above zero, and the flakes are big and mushy-wet-looking. Serves them both right - Ted for wanting to avoid conflict, YM for wanting to get a jump on bike-riding season. Hope nothing terrible happens to YM, coming home in the snow.