OMG this was so long ago

In all my kvetching, I almost-but-not-quite forgot to mention: 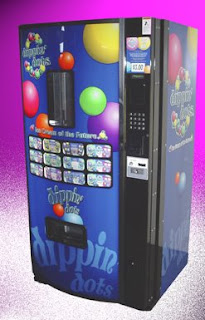 
When Ted & I went out a few weeks (months) ago to see Slumdog Millionaire, the theatre had a vending machine for Dippin Dots, so we ditched the snack-bar lineup and stuffed a bunch of money in the machine, which very nearly almost didn't work for us, but then it did.

For about $4, it dispenses a reasonable-sized packet of little dots of teeny-tiny frozen deliciousness.

Which I then sat munching in the dark... they lasted quite a while.

I totally forgot which flavour I got; basically, the machine was almost sold out so I ended up pushing buttons at random until it agreed we could have one.

I also forget which theatre it was, but I'm sure Ted remembers so we can go back there again and again and AGAIN!!!