Mmm... that is SOME cup of coffee! 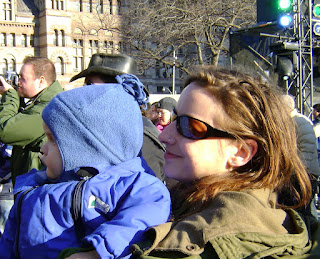 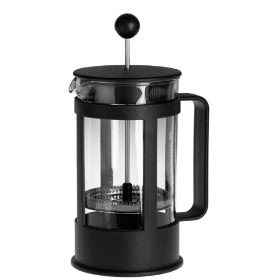 And my new BODUM!
(Bodum Kenya, apparently the old style, $20-something at Starbucks)

If anyone has any experience with these things, I'd be happy to find out the proper ratio of coffee grounds to water.
But actually, I think I pretty much hit it on the first try - 4 of the scoops that came included with the pot and then I almost-filled it with water. Tasted delightful and certainly I suddenly feel extremely perky & motivated to make supper!

Stresses now:
Nanny is in the hospital.
Eli is in the hospital - actually, this is a good thing, as hopefully he'll drink less.
OK, the big one is that nobody has responded to my facebook invite to Daddy's shloshim gathering. I really hope it's not just the three of us sitting around. :-(

This is like the proverbial throwing-a-party and nobody comes. The rebbetzin of our shul is supposed to come, but if nobody else does, I'm going to tell her not to bother.

Waah! I guess I'd better make a few phone calls; I was hoping facebook would save me the time and trouble. Sigh... nobody loves me.

Meanwhile, SUPPER must go on:

Supper! Special for Tu b'Shvat
~ Chicken with mangos & curry / coconut sauce
~ Roasted noodle raisinette (sounds icky but it's good, though no substitute for vermicelli rice (aka rice a roni), which is now impossible to find in the kosher section)
~ Beets roasted with almonds? Maybe... though it sounds kind of yucky on paper.

Speaking of impossible to find kosher groceries, what's up with Manischewitz Chicken Soup? For years, it was a staple in our pantry, but all of a sudden, after last Pesach, I guess, it simply does not exist. Weird.

It's now 4:30 and the baby has been up, playing in bed, since 2:30. Sigh. He hasn't cried at all, but I suspect the half-hour he slept in the car and stroller after Morah Ilana this morning have ruined him for the day...

Speaking of Morah Ilana, very cute, he hasn't been in so long (Ted's been here on Mondays, so I have just been leaving him sleeping at home and taking Naomi Rivka by herself), and when I told him we were going, I wasn't sure he'd know who she was. But all of a sudden, I noticed him getting excited and signing CAR, and then MORE. I asked what he wanted MORE of, and he just kept saying MORE until I realized... "MORE-ah Ilana?" He waved his arms around happily, and sure enough, when we saw her, he started signing MORE even more frantically.

Boy was he a happy puppy at circle time, especially compared to his sister, who flops into my lap like a wilted daisy the second the singing begins and doesn't get up willingly until circle time is over. He was spidering his hands at spider time, and fluttering them around, and twinkling and having the time of his life! (oh, Naomi does get up to go over and kiss Reb Yid, the puppet... that's how I know she's still paying attention)