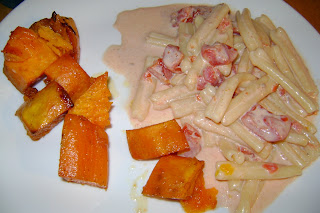 That supper picture was from last Thursday's supper, by the way... casarecce in creamy tomato sauce, sweet potatoes and a 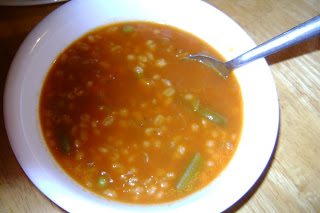 Last night, I made a soft-meat stew - it was originally going to be for my father, who can only eat soft food - in the new pressure cooker. Everything turned out fantastically, and I even made two loaves of olive-oil pepper bread to dip in, but unfortunately, neither of the parents were there, which turned out to be a good thing because even with two loaves of bread, two pounds of meat, four potatoes, two carrots, two parsnips, etc., there was BARELY enough for us plus Abigail.
When did we become such big eaters?

Ran into Baila, an old friend from U of T, when I was at Sobey's yesterday shopping for the supper fixins. She had her first four months after YM was born... and went on to have 6 (six!) altogether. She says it so casually, "just the six..." Ha. Anyway, her youngest is 6, she's back in school, studying psychology. I'm mostly just writing it here in case I forget because I really was super-happy that she went back.

She was thinking of doing a Master's way back when I knew her. I'm glad it's almost happening for her. Which reminds me, I really ought to think about getting started on what I'm going to do for the rest of my life... once I'm done with these kiddies!