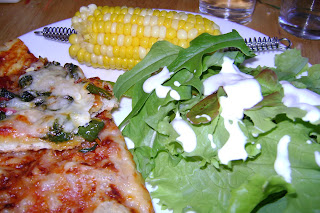 Supper:
I had already taken bites out of BOTH these slices before I remembered to take their picture. The lettuce is from the garden, perhaps the last of it. Corn from the supermarket. Pizza, homemade, herb crust. 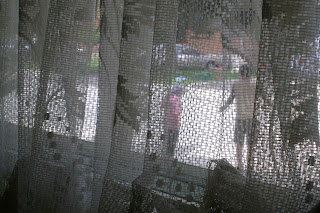 They were digging up the street in front of our house today - still working away at building the new monster house across the way. Anyway, the crazy Italian neighbour lady has been complaining about the mess all along, but today, it reached a new low.

She actually went out with her broom and stood there, sweeping, in the middle of the road. To be fair, they actually, literally, dug up the street. No idea what they had to do to the house unless they needed some newer, better form of plumbing than what the rest of us, in our 70-year-old bungalows, already have. It would figure.

Anyway, here, she's berating Sam, the owner. Obviously, I took it through the living-room curtain so they couldn't see me taking the picture. She's got her hands on her hips and stands about half his height. And he's shrugging in the ultimate "not my responsibility" gesture that typifies his building project so far. We are all so thrilled about getting these new neighbours.

Naomi Rivka still calls it "Dana's house." That's the nice gardening lady who lived there last year and let us pick her cherries. I wonder if the new people will let us pick their cherries? They certainly won't have a garden, in the five inches left at the front of their property once their house is built.

Ted figures the new owners will move in this fall, live there for a year, and then move off somewhere better, making a fortune along the way off their monster of a house.

We told Naomi that Dana moved away, that people only get their house torn down if they WANT it torn down and ASK to have it done. Because those backhoes were scary that came and pushed it down. It only took about 15 minutes to destroy most of the house. I didn't want her to think it could somehow happen to us.

But she still asks when Dana is coming back.