Why I don't live in Canada but I still voted there 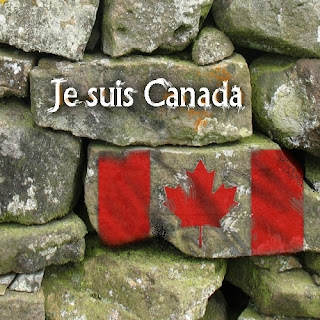 In the leadup to Canada's federal elections tomorrow*, there's been lots of talk about whether expatriate Canadians should have the right to vote.

* (yeah, I know, super-awesome that they did it again on a Jewish holiday!)

Last time around, we didn't.  They changed the law to say you could only vote if you'd been gone less than 5 years and intended to return.  We were under 5 years, but couldn't honestly say we planned to return to live in Canada.  So our rights were taken away.

But this year, in response to a legal challenge from a pair of Canadians abroad, the Supreme Court reinstated our rights.  The 5-year condition, they said, made no sense and hadn't been instituted in response to any particular problem, real or perceived.

Still -- lots of Canadians, including some of my beloved family members, don't think we should be voting.  They're not alone.  I don't have statistics, so I can't say most, but I know many people back there feel that we shouldn't get to vote unless we sleep on Canadian soil a certain number of days each year.  And a few days ago, CBC ran an op-ed by Mark Reynolds, an expat who claims, "I don't live in Canada anymore. I shouldn't have the right to vote in its elections."

As I'll explain below, the Supreme Court disagreed, and I disagreed.  Here are a few reasons why.

1) Being Canadian didn't stop the minute we moved to Israel.

It sometimes takes weirdly a long time to explain that sharing a border doesn't mean we are the same as people in the U.S., especially given that nobody here considers being Israeli and being Lebanese to be "basically the same," despite the intimacies of geography.  Or Israeli and Jordanian, or any one of our neighbouring countries, peaceful or otherwise.

True, we speak the same language and watch American TV, but they have Netflix here in Israel now and you can listen to Jordanian radio from anywhere up and down the border.

And, of course, if anything about Canada is ever in the news, we're the ones who are called upon to explain and sometimes defend it.  Not to mention that being Israeli has made us a LOT more politically aware than ever before... not just here but a global awareness that we were sometimes too stultified to care about when we were immersed in the sleepier world of Canadian politics.

To some extent, I feel as though I’ve come of age as a Canadian only after leaving Canada and seeing it in a more global perspective.  A perspective I feel helps me make decisions as a more informed Canadian citizen.

Maybe Canadians who live in Canada shouldn’t even have the right to vote unless they’ve lived somewhere else and realize just how awesome our country actually is.

2) We may live in Canada again someday.

We hope to spend the rest of our lives in Israel, but having known many olim here who come and go for various reasons, like caring for a family member back home, finding work, collecting pensions, and more,  we know that's realistically not always the case.

Then, there is the worst-case scenario, which we hope and pray will never come to pass, in which Israel is attacked and becomes a scary, violent place to live.  Not just regular scary and violent, but teeters on the precipice of ceasing to exist.

We ardent Zionists hate to think about this scenario, but there it is.  I'll look it in the eyes:  Israel may someday be too dangerous to reasonably raise children here.  Is it disloyal to think about fleeing to Canada if we have to?

My father grew up never knowing his grandparents, aunts, uncles -- because they didn't have another citizenship to fall back on when Poland became too dangerous.

So yes, deep in the dark, dark recesses of my mind, for good reasons or bad, our other home is Canada and we may well find ourselves back there someday.

3) We are as Canadian as anyone else.

In the Supreme Court decision, Chief Justice Richard Wagner wrote that many expatriate Canadians "maintain deep and abiding connections to Canada through family, online media and visits home, and by contributing taxes and collecting social benefits.”  That part has been extensively quoted in the media.

He also said, and I think this is lovely, "no correlation has been shown between residence and the extent to which citizens are affected by legislation."

Did you hear that, everybody who says I'm not affected by the closing of the Wheat Board and fisheries and whatnot?  And hey, he also wrote that "government policies can have global consequences."

Hmm... does that mean I'm NOT a terrible Canadian for allowing my feelings for Israel to sway my vote to some extent (just like they did when I lived in Canada)?

Okay, I'm not allowed to vote locally because it's true that garbage collection and the goings-on at City Hall don't affect me as much.  But what goes on in Parliament has no less impact on my life, potentially, than it does on other Canadians, regardless of where we/they live.

When there are big things to talk about and think about in the governing of my country, I like to know my vote counts.

Canada is our home.  Just because I have two homes doesn't mean it won’t always be.

This summer, we drove past the Parliament buildings in Ottawa and the Supreme Court, saw the official Prime Minister's residence, took a tour of the Canadian Mint, and celebrated our fabulous Canadian heritage in dozens of other big and small ways.

YES, tourists can do those things.  But when we drive past, I can tell my kids, "Those are ours.  That's our Parliament.  That's our Supreme Court.”  Not just mine, but theirs.  A legacy that I hope they will choose to pass on to their children, though Canadian citizenship isn’t automatically passed on, as it is in some countries.

I want my kids to know that as Canadians, our government cares just as much about their rights as it does about the rights of those who walk these streets every single day.  And that should they choose to exercise their right to vote, it will count as much as that of any other Canadian.

Je suis Canada. I care.  I voted.  And if you’re Canadian – no matter where you live – I think you should, too.