Someone she can look up to: Proud, strong, smart, gorgeous religious women we're not afraid to show our daughters 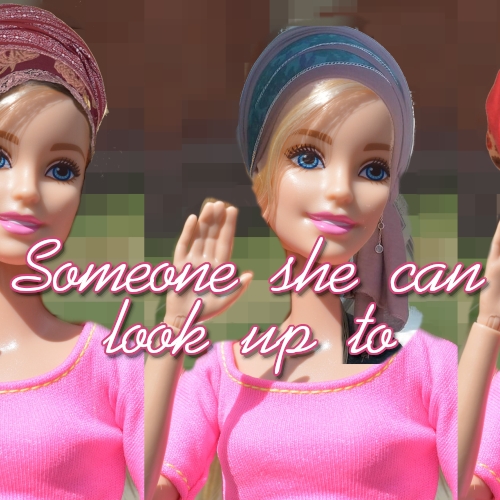 Not long after we moved to Israel, I found Naomi Rivka, who was 8 at the time, playing with her Barbies.  The Barbies were all dressed up, as usual, but there was something new: one the head of one, Naomi Rivka had wound a delicate assemblage of toilet paper and lace, towering high and graceful over the doll's pretty, slender face.

Here in Israel, we were suddenly surrounded by beautiful, graceful, slender young married Sephardi women, for whom a tichel, piled as high as possible, is the de rigeur headware -- and that was exactly how Naomi Rivka wanted her Barbie to look.

And because 8-year-old girls are reasonably transparent, chances were good that that was how she herself wanted to look someday.  Tall, slim, high cheekbones, okay... those may be genetic factors.  But gloriously crowned in a high, swirling tichel... that's something you learn from your environment.  That's something little girls pick up from looking around and role playing years, and even decades, before they're in a position to dress that way themselves.

For my daughter, and all our daughters, role playing, and visualizing their future as Jewish women, requires role MODELS.

What role models are we showing our daughters?

Face it.  There’s no shortage of images of women out there in the world.

Which ones do we want them to see?

Lately, now that Naomi Rivka is 14, the women she looks up to aren't religious.

Israel may be geographically far away from North America, but today's world is a small world.  The videos and Instagram feeds that my teenage daughter scrolls through every day are the same ones any kid can find, anywhere in the world.

Even if you keep your daughter far away from YouTube (good luck!) -- unless you keep her in a box, she's going to see images of women.  And she's going to be thinking about how she wants to look when she grows up.

Let's face it.  Gorgeous, strong, powerful, smart religious women are hard enough to find without their images being banned in many religious Jewish publications.

These publications ban pictures of girls and women because they offend men.  Or rather, they MIGHT offend men, but instead the publications are "playing it safe" and not even taking the chance that men might be offended.

Whatever the next big social media trend is going to be, you can bet 99% of it is going to be role models I don't want her emulating.  So why are we cutting our daughters off from their future as proud, strong, smart, gorgeous religious women?

I wish there was a more upbeat note to end on, but honestly, the whole thing makes me want to weep.

Please -- we can't be afraid to show our daughters the women we hope they'll become.

Please – dare to show them that a proud, modest Jewish woman is a GREAT thing to be when you grow up.

The religious community is shooting itself in the foot, pretending this is halacha when there is absolutely no basis for it.  When twenty years ago, this thing was completely unknown.

As Rabbi Yitzchak Breitowitz has said, far better than I could (link):

"In the vidui of Rabbeinu Nissim, the penitent begs forgiveness for a variety of transgressions, among them is, "What You declared pure I deemed unclean... what You have declared permitted I deemed forbidden." Erasing women from photographs or blurring their faces even if they are modestly dressed has not been the practice in klal yisrael, and to take on a stringency over and beyond anything required by gedolai yisrael is not only arrogant and pretentious but profoundly offensive and demeaning to women as a whole."

There is nobody, absolutely NOBODY we should be more concerned about from a kiruv perspective than our own children.  Our own daughters.

But the opposite is also true.  When you drive away a girl, you've driven away a family.

When you show your daughter there's nothing for her to aspire to as a Jewish woman, that all her role models lie outside the frum community, you're pushing her farther and farther away.

But when you show her pictures of what she could become… she’ll have a chance to blossom and grow and long to meet those expectations.

Sadly, I didn't take pictures of my daughter's ticheled-Barbies while I had a chance! The gorgeous tichels on the Barbies featured in this post come from the ModLi and Wrapunzel sites.  Go there to buy gorgeous things to stick on your head!

Two Facebook groups that are part of the solution:

And in case you believe this isn’t happening, here are two of many rather egregious examples lately…

Have you noticed places women have been erased from Jewish media?  What are you doing to stop it?  Let me know in the comments!