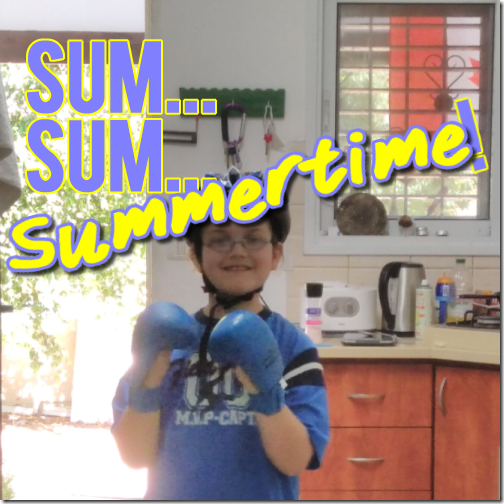 Well, we're back in the homeschooling saddle, if only for a few days before I'm heading off on a crazy-stupid two-day gallivant across Europe.

The entire month before summer vacation, every Israeli parents' WhatsApp group is on fire with camp registrations and plans to ensure that our beloved sweeties don't have to go more than ten minutes without a “misgeret,” or framework.

It's mostly for the parents' benefit, so they don’t have to miss work, which I get, but I also believe kids need a break.  I mean, school let out last Friday, and on Sunday morning, most of my kids' friends were off to the various "day camps" run by the schools.

That one Shabbos can't have felt like much of a vacation.

I was wondering how it would go with summerschooling this year, because NR is getting older and GZ is the same amount of stubborn as always, or perhaps more so with age.

But if these last 3 days are any indication, it's actually going better than in previous years.  This is our fifth summer in Israel, meaning they're well-versed in the routine and I guess things feel comfortable and summertime-normal with our learning schedule.

But it's more than that.  When we were finished school stuff for the day, NR was dancing around the kitchen waving her arms around like a victory dance, feeling absolutely great.  I think at that age, there are probably so many conflicting impulses running around in her mind that to fall into these familiar childhood patterns for a couple of hours, sitting with me to do math, or working in a workbook with GZ, must be very grounding.  Or something.  Whatever the case, I'm 100% sure she was happier than if she'd sat around moping in bed reading all day.

(I know because that's what she does every single Shabbos...)

Of course, we have to weigh that against the miserable moments, like GZ wasting 15 minutes refusing to name any pronouns, not just in French, but in English or any language.  He’s a different person at the end of the day; I have to remember that and get him when he’s fresh and eager.  (As seen in the illustration above.)

Despite the tears late in the day today, he too is bouncy and eager to learn every single morning so far (all 3 of them!).

In case anybody's wondering, here's where we're at in our studies this summer:

I know that must look terribly ambitious (nine subjects?!?).  But enough of them aren't books-and-writing subjects that it doesn't feel heavy.  The formal subjects are math, vocab, Hebrew, writing, and Civics.


Sheesh… this post has been sitting here all day while I ran around doing paying attention to my kids.  And now it’s time to leave for the Great Gallivant 2018.  Since Israel Railways decided to build a new high-speed line to Jerusalem, they’ve had to shut down the continuous train line connecting the airport with to our part of the world about fifteen times this year, or at least it seems that way.  Which means I have to take a longer and circuitous route and leave at midnight to catch a 5:30 plane.

I have no-one but myself to blame, since I’m the one who bought the tickets.  But still.  Ugh.

So our summerschool is officially on vacation until next week.  See you on the other side!