Who's YOUR tribe? Finding yourself in a crowd 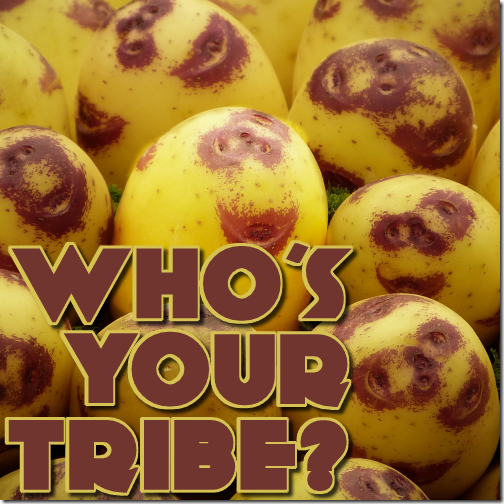 Have you ever had the feeling that you completely belong someplace?

Before we left Toronto, I got to go to the Torah homeschooling conference twice.  And the biggest thing I felt, both times I walked through the door of the Jewish Community Center in Baltimore for the conference, was "Here I am."  Not JUST me, but people like me.  My tribe.

"Finding your tribe" is a popular expression that goes back maybe about a decade.  I have no clue where it comes from, or who coined it, and if you know more than I do, I'd be happy to find out.  Google isn't showing me any references before 2012, but that's because Google, like most of us, is entirely now-oriented.

Finding your tribe is a primal thing, locating the people you click with and clicking.  It's about what Kurt Vonnegut called "Lonesome no more!"--a campaign slogan he cooked up for a fictitious presidential candidate in his book Slapstick.  Because he knew that people are lonely; so many of his stories are about extremes of loneliness, and solutions, often clunky, for solving that loneliness and bringing people together. 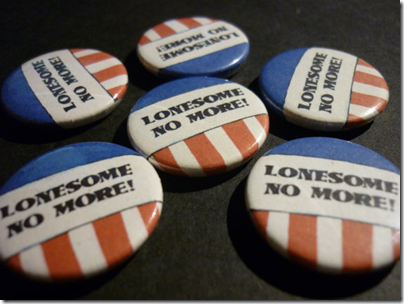 Of course, as Jews, "finding your tribe" has relevance on a whole other level.  Maybe you're descended from Dan; maybe from Asher.  Who knows?  We may never find our actual tribe until moshiach comes, but I feel like the concept still resonates.  That we know ourselves to be tribal people in a way that maybe others don't.

Then there’s "bagelling," the Jewish tribe-finding algorithm described by Urban Dictionary as "you are Jewish, and you want other people around you to know that, so you say or do something Jewish in nature in order to drop the hint so they know you're one of the tribe," like announcing out loud in Starbucks, "So when I was in shul yesterday..."

We see Jews, we meet Jews, we click with Jews.  But I'll be honest: this particular tribe-finding technique is not my bag, personally.  I'm Jewish, you're Jewish, okay.  But you're going to need to do more than that to be like me.  To give me that feeling of "Here I am."  I guess, raised mostly around non-Jews, I'm just as likely to glom onto non-Jews unless I'm specifically looking for kosher food or a mikveh.  Raised in a small and non-religious family, I don't do Jewish geography--it's a frustrating game that usually ends in me shrugging and saying, "Well, Toronto's a pretty big town... No, I'm not related to anybody..."

Having a name like MacLeod actually gets me off the hook from the Jewish geography game in some ways.  People hear the name and figure I'm an outsider with very few cards to play.  Mostly, that's a relief, although sometimes, I do want to talk yichus (family connections), like about my grandfather who helped found the Board of Jewish Education in Toronto over 70 years ago.  I may be an outsider, but I'm an inside outsider.  But then, too, I don't want to confuse people.

While Jews are not automatically my tribe, some groups of Jews are, as I discovered at the Torah homeschooling conference, where I saw that tribe is about more than being Jewish, being religious, and choosing to homeschool.  I guess it's about what Anne Shirley (of Green Gables) would have called finding a kindred spirit.

And as Anne observed, “Kindred spirits are not so scarce as I used to think. It's splendid to find out there are so many of them in the world.”

For what it's worth, I thought living in Israel would be more of a tribe-finding experience than it has been.  It's been good, it's even been great, but not everybody I meet here is like me at all.  Few people give me those "Here I am" goosebumps.  (In Hebrew, "here I am" is "Hineni," a word used over and over in tefillah and other sources...)

But a few weeks ago, I went to a used-book sale that's held a couple of times a year in Maaleh Adumim.  It's a fundraiser, and all the books are in English, and they raise a ton of money.  I've been meaning to go for a while, but Maaleh Adumim is both far away and out of the way.  But hey, whatever, it's books.

The only time I could go to the sale was the second and final night, and it turned out all the books were 3 shekels (about 80 cents), which was even better.  Books!!!

While I was pawing through the books, I stopped to look up and look around and listen to the people around me.  And got hit square in the face with that feeling once again: "Here I am."  Not JUST me, but people like me.

In this case, many of them also looked like me:  middle-aged ladies, English speakers, olot (feminine of olim), tichels, glasses.  All pawing through books, chatting loudly with whoever had come along with them, sharing updates about their lives, their kids, their families.  All taking a few minutes on a busy Thursday in May to grab a whole huge pile of cheap books.  Books!

Even the men there were my tribe, though they didn’t wear tichels.  At one point, I mentioned loudly to my daughter that I was looking for the book To Kill a Mockingbird, which I’m reading out loud to the littles (we stop about every two paragraphs for some kind of explanation and conversation!).  About ten minutes later, a guy called out, “Who was looking for To Kill a Mockingbird?”  I thanked him and walked out with it half an hour later (three shekels!).

I’m thinking about all of this right now because I’m getting ready (in a slow, roundabout way) to fly to LA for a children’s-book writers’ and illustrators’ conference (SCBWI LA18).  And I can’t wait, but I’m also wondering… will this conference, too, feel like a “tribe”?  Even though they’re not Jewish and don’t look like me, haven’t made the same life choices as me, don’t necessarily share the same values, will we have enough in common that I’ll feel that click, that shudder, those goosebumps?  Think, “Here I am”?

I’m nervous because I don’t socialize gracefully or well.  On some level, I truly believe that I’m older, dumpier, boringer than almost everybody else around.  On some level, I believe it’s not worth listening to what I have to say, but on another level, I lack the self-control to quit talking even when it’s not appropriate, an awkwardly self-conscious combination that often leads to blank stares.

But maybe there will be a few people there who feel awkward too.  Who don’t quite feel like they belong, yet they’re so passionate about writing for kids that they absolutely had to attend, had to find the tools to make their words and stories better and get them to the audience of kids and families that they’re sure is waiting somewhere out there.

And maybe I’ll find someone like that and walk up to her and say hi.  “Are you my tribe?” I won’t say.  “Is this seat taken?” I might say, but will probably say, “Is someone else sitting here?” and secretly mean “Would you rather I didn’t sit here?”

And maybe she’ll say yes, then no, then just shake her head and laugh, pat the seat, and say, “Is this your first time here, too?” and “What do you write?”

(photo: Potatoes standing out in a crowd © Mark Freeth via Flickr)