When am I no longer faking it? 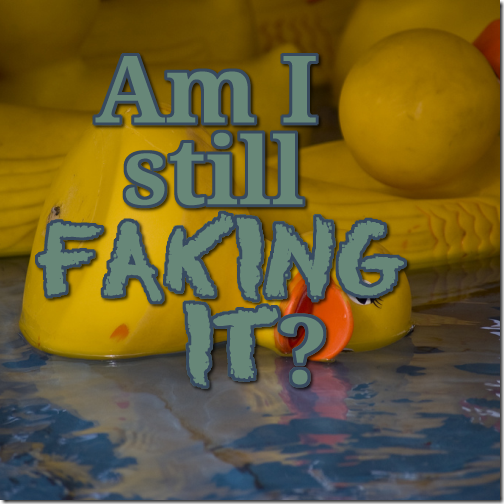 I just caught a glimpse of myself in a reflection, in a car window, on my way to the train station.

“Wow,” I thought.  “That sure does look like the real deal.”

What do I mean by the real deal?

Okay, I’ll come out and say it.  A 40-something frum woman, hair covered, a little dumpy, a little boring, pretty content with her quiet life off somewhere in Nowhereville, Israel, following the ways of Hashem.  You’d never know I was only faking it.

Becoming a baalas teshuvah in my early 20s, fitting in was super-important, because if you think about it, I was kind of in freefall.  I’d given up a whole lot – friends, beliefs, even, to some extent, family.  So being accepted was kind of a matter of survival – if I wasn’t accepted, I’d be all alone.

So when did I stop caring?

I don’t know if I ever did, but at some point, I realized that “fitting in” was never going to happen.  So it became more important to surround myself with quality rather than quantity, people who would see me clearly and not run screaming in horror.

Of course, I was still faking it to a great extent.  Raising frum kids while only knowing a few of the right kids’ songs, a few of the right midrashim on the parsha, a few of the weird minhagim that make up a Jewish life (the right order to put on shoes) while not being fully aware of others (something about keeping onions overnight?), and totally oblivious to others (what, there’s a thing you can stick under your tichel to make it not look so flat – not everybody uses socks???).

Somehow, I did it, staying one step ahead of the kids, leading with hesitation, with fear, and occasionally, with the excitement that I was managing to raise them with such precious traditions, such a good Jewish education, such a deep understanding of their heritage – glimpses of the “real thing” that I could never be shining deep in their eyes.

So I faked it, more or less, and some of the kids grew up.  And somehow, I found my way to Israel – knowing nothing about the country other than this was where I wanted to build a life and raise Jewish family.

Fast forward to today, where I somehow find myself smack-dab in the middle.  Okay, a little past midlife, though iy”h, it will still be a long and wonderful life, living a religious lifestyle more than half my life, being a mother almost half my life (that will happen next year!), just one religious Jew in the midst of a neighbourhood full of us.  Full of people just like me.

And here I am, reflected in the car window.  Middle-aged, content, pouffy tichel on my head (yeah, I finally figured it out), confidently striding towards the train station along a route I know well enough to relax and not look where I’m going but instead allow my eye to catch on a stray reflection of myself and wonder if anyone will ever figure it out…or if I’ll live the rest of my life with this deep, dark secret.

Still faking it, after all these years.

Faking it, yet somehow, implausibly, exactly where I belong.