Time for a Simcha! Short Happy Vort for a Balak Engagement 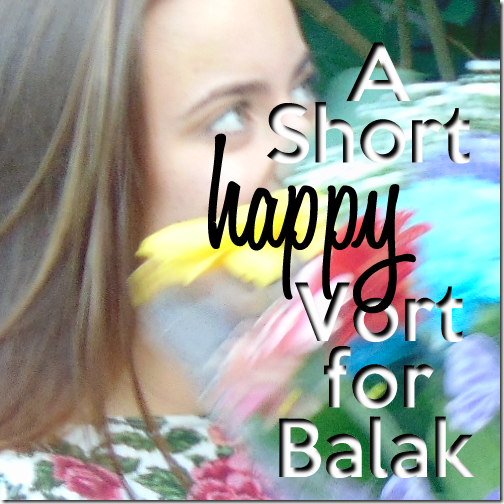 Our older daughter is engaged!!!  We are so utterly overjoyed.  If you are among the many, MANY people we care about who weren't able to make it to the vort tonight (given that it was held in Toronto with only 3 days' notice), I wanted to share this with you.

Know that we were thinking of you and are sharing our simcha in spirit if not in real live actual person.

Speaking after the father of the chosson and one of his rebbes, I could have gone on and on and on all night – you know me – but I was told we only had 3 minutes to speak, so this was it.  Enjoy!

In this week’s parsha, Balak, an unusual thing happens. After Bilam tries to curse Am Yisrael, he comes up with another plan, to lead them into avoda zara through Midianite women. When this happens, Moshe Rabbeinu is not only silent, but he stands weeping. This is one of only few times in the Torah that Rashi says “nitalmu mimenu halacha,” the halacha was concealed from Moshe.

There are five places in the Torah where this happens. For instance, when it comes to bnos Tzelofchad, the daughters of Tzelofchad, who asked about inheriting land in eretz Yisrael. Some say that was done as a punishment for Moshe, who had bragged about his ability to solve problems in halacha, so he was taken down a notch by Hashem, so to speak.

However, many meforshim agree that the situation here in Balak doesn’t fit the pattern. One important reason is given in Midrash Tanchuma, shared by Rashi, which is that here, Moshe’s forgetting is a way of letting him gracefully step aside and allow Pinchas to take a leadership role.

We already know how Moshe reacts – gracefully, and with humility. Moshe is what folks in Israel call a vatran – a person who knows when to let go, to step aside. It’s sometimes translated as “quitter,” but that’s not quite right, and certainly it doesn’t match what we know about Moshe Rabbeinu.

Rather, Moshe knows how to put himself in the background and make way for other leaders – like his siblings Aharon and Miriam; like his craftsmen, Betzalel and Oholiav; like those who will succeed him, Yehoshua and Kaleiv.

The first engagement and marriage of a child is like that for all of us – a reminder that we, too, must step aside and make room for a new generation. We parents, grandparents, aunts, uncles, are here at the celebration, but we’re in the background in a way that we’re not at a bris, at a baby naming, at a bar or bat mitzvah. It’s not about us.

It’s interesting to see that what Pinchas realizes in this parsha, even before Moshe Rabbeinu does. Pinchas grasps such a central lesson about the Jewish home, the Jewish family, the role of the Yehudeese, the righteous Jewish woman. We see all these things in this week’s parsha by contrast, recognizing how the influence of the wrong woman can lead a husband and a whole family down the wrong path.

So it seems just right that this week, we are stepping aside and shining the spotlight on exactly the opposite situation from what Pinchas perceived: a young couple who are very determined to do the right thing, and from our perspective, a sweet little girl who’s not so little any more.

We are so proud of how hard Elisheva Chaya has worked and lived her principles over the last few years, creating a life for herself in eretz Yisrael. Now, she’s opening up that life just a little to accommodate a whole other person who is just as principled, just as strong, and more than a little courageous. Building a bayis neeman beYisrael, in eretz Yisrael, taking their place as the next leaders of our people. As the navi Bilam was forced to declare, “Mah tovu ohalecha, Yaakov.” There’s nothing like a Jewish home, a Jewish family, a place the shechina can call home.

Shraggie, we’re so happy to have you in our family. Mazal tov!