A Phone Call from the Matzah Man Another one from the archives…

It’s done! Once again, this year, I've been putting it off and putting it off, and now, at last, it's done. It's a week before Purim, and the shemurah matzos have been ordered for the year.

He always pronounces the name right, an oddity I can't help respecting.

My matzah man, Rabbi Aronov — he always refers to himself tersely as “Aronov”— has been calling for over a month, and I have been putting him off, not wanting to admit that Pesach is right around the corner again. 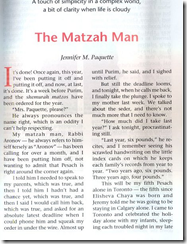 But still the deadline loomed, and tonight, when he calls me back, I finally take the plunge. I spoke to my mother last week. We talked about the seder, and there's not much more that I need to know.

“How much did I take last year?” I ask tonight, procrastinating still.

“Last year, six pounds,” he re cites, and I remember seeing his scrawled handwriting on the little index cards on which he keeps each family's records from year to year. “Two years ago, six pounds. Three years ago, four pounds.”

he was going to be staying in Calgary alone. I came to Toronto and celebrated the holiday alone with my infants, sleeping each troubled night in my late grandmother's not yet empty apartment.

I bought the plane tickets when I found out she was dying, but we didn't make it — she never met Elisheva Chaya, and I never said goodbye, except in the general way that a farewell to elderly relatives is always partly that final goodbye, just in case.

“I don't know,” I tell my matzah man, feeling more hesitation than I dare voice at the weight of so many difficult years. “Last year I had way too much. Maybe I should take four pounds.”

He pauses, as if hesitating before spoiling a fresh line on the little index card that bears our last name.

I interrupt his silence. “Wait. Let me check the calendar.” I peer at the calendar and pretend to figure out how many sedarim we'll be having at home, how many Yom Tov meals we'll be eating in or out, when really I have nothing scheduled yet, so I'm just guessing at this point.

“Four doesn't sound like it will be enough,” I say hesitantly, imagining my hungry family cramming down the shemurah matzos at the seder, “but six pounds really was
way too much. Maybe I'll take four anyway, so I don't have too much.”

This will be the first seder I have had with my parents and sib lings since I became observant more than seven years ago. It is bound to be a rocky, bitter sweet experience, which I am at once dreading and looking forward to with an eagerness I have not felt since I was six or seven. I imagine my son singing Mah Nishtanah to his Bubby and Zeidy. I picture my daughter on my father's lap, bargaining for her afikoman present. If only I can make this happen, I imagine. But what a great big if.

“How much is it this year?” I ask, even though my mother has paid for it every year since we moved back.

“I'm not sure yet, but, G-d willing, the same prices as last year.” He is a sweet man, and suddenly I feel ashamed for wasting his time. He makes his living selling this matzah and selling holy books, and he works as a sofer, a scribe, too.

He was the man who wrote my get, the Jewish divorce document, that hot Labor Day Monday my marriage ended.

He wrote it out so slowly and carefully I thought he would never finish, and after he was finished, I thought the ink would never dry. I watched the process interestedly, yet from a distance, feeling my marriage dissolving around me, but comforted by the holy people who still made me feel welcome and complete and good In their midst.

This rabbi, this sofer, this matzah man, lives honorably and well, a life devoted entirely to Torah. A friend told me once that during Pesach my matzah man eats nothing but “erdeppel and fleish” — potatoes and meat. Even chicken isn't on his menu during that week, my friend confided, because the chickens might have been raised on grain. I envy him that piety, so far from simple minded, yet more simple than any I will ever know. I give in to his sweet Pesach hopefulness.

“Sure, I'll take five. You're a great salesman,” I say, smiling.

I can practically hear him writing it down, my decision at last. Al most as an afterthought, I ask him, “Do you know when they'll be arriving?”

“G-d willing, the week after Purim.”

I smile again, thinking of the fact that in two weeks I doubt I will have cleared a crumbless zone for the matzos to rest until that first seder night.

I feel like he's nodding into the telephone, transaction completed. I expect him to wish me a happy Purim, the usual greeting now that the month of Adar has begun. Instead he says, “Thank you. A kosher and freilichen Pesach.” A happy and kosher Pesach.

For him, that's what this transaction has been all about. He is the matzah man, after all. Purim doesn't matter so much. Nothing at all matters so much as the fact that he has now sealed me and my family on his little index card for a good and happy and kosher Pesach.

Maybe we all need a matzah man in our lives. Someone to remind us of how important these things really are. If we make the effort — however difficult it may be, emotionally and physically — to let the holiday into our hearts ahead of time, we will truly come to merit celebrating it in health and happiness, surrounded by the people we love the most.

by Jennifer M. Paquette (this used to be me – in case you were confused!)