Staring in the Mirror: a birthday, a yahrzeit, a very good day 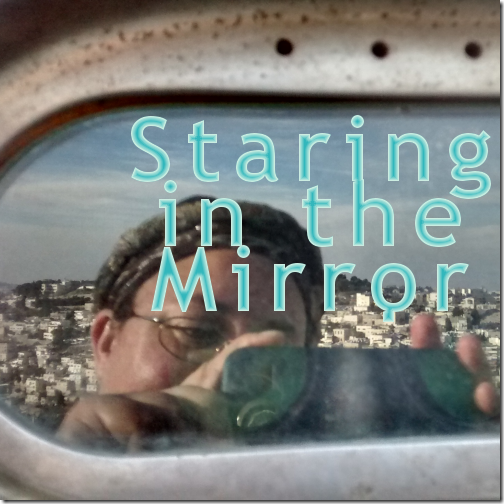 Eight years is a long time.

Eight doesn’t seem like a special number at first, unless you’re Chinese, and then, I’m told, it’s extremely lucky.  But even in Judaism, eight is a special number: it means one more than nature, as we see in connection with bris milah and the eight-day miracle of Chanukah. It’s also my shoe size, if you don’t count the half.

When it comes to a yahrzeit, eight feels like the first "big" number, the first time you can't honestly say "it's only been a few years..."

Today, we sat basically at the same bus stop where we sat across from the Merkazit (central station) in Yerushalayim eight years ago.

Today, we were minus two kids in one way, but minus four kids in another, because the two who were babies then have magically been replaced by two who are quite a bit older and smarter (and GZ can walk now, which is a plus).

Today, we didn’t do anything we haven’t done before:

we went through the tunnels, visited the kosel and davened there, and then went and sat on the Aish rooftop and just enjoyed being alive and being together.  We had supper with Elisheva and her friend, which also reminds me that the Littles are not the only ones who have grown up quite a bit. 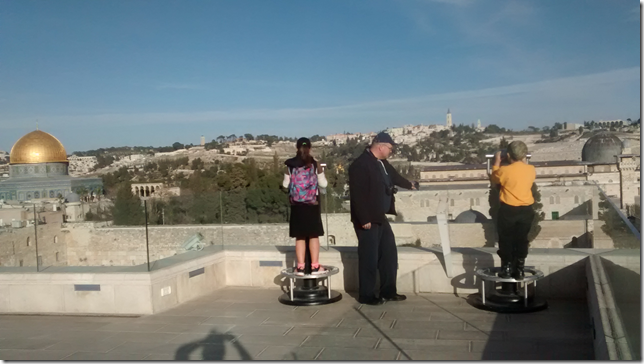 I want to share a joke I'm sure you've heard:

There’s this religious Jew who davens at the Kosel in Jerusalem every single day.

One day, a non-observant Israeli walks up to him and says, "I see you here every day, seven days a week. I'm impressed.  Tell me, what are you praying for?"

The man replies, "I am telling Hashem all about my financial problems, about my daughter who needs a husband, the problems of the Jewish people all over the world."

"Well," the secular Jew asked, "how does it feel to do that all these years?"

The man turned to him and said, "Nu, what do you expect? It feels… like I'm talking to a wall."

I like this joke because it is so very, very wrong.

The joke here is that any intelligent reader (wink!) knows the wall doesn’t change.  Heck, the wall doesn’t do anything.  It just sits there.  This is what some people think “organized religion” (as if they’d prefer some other kind) is all about.  You do the same fixed thing over and over for your whole life and, of course, as any rationalist knows, you don’t get results.

And hey, while we’re at it, isn’t that just the definition of insanity?

The stones don’t change.  It would be silly to think they could; nobody does.  Just as the water of the river never changes – it’s always going to be your basic H2O, give or take a little pond scum.

But just as the children are not the same children, the me eight years ago at the Kosel is not the me today at the Kosel.  And I may be talking to a wall, but through these changed eyes, it is as different a wall today as the river, which is ever changing, ever flowing around my ephemeral footsteps.

Which means, of course, that – staring in the mirror – I am not the me my father knew.  The daughter he kissed goodbye is not the daughter who turned 40 or any of the numbers beyond.  I seek approval he can never give; I long for connections I will never have again.

Eight years is indeed a very long time, and that hurts.  I don’t have great answers, and I don’t have quick fixes, although perhaps after eight years there’s less need because the pain is no longer raw.  The wound is a scar and the scar is fading, though it will never vanish.

And there are days that are warm and sunny, when there are children and love and just the right mix of holiness and silliness, capped off with some delicious kosher eating, and you feel great, and life is good.

I guess the answers don’t always have to be deep to keep us going.

We are fond of clichés like these because they resonate with what is common and human inside each of us.  Ripples of the river in which we’re all wading awkwardly along, just doing our best to cool off, shake off the dust, and not stub our toes on a few stray pointy rocks here and there. 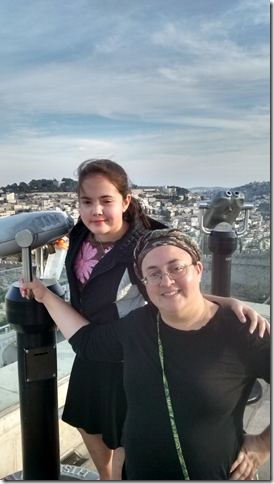 My sister Sara is fond of saying, “What a time to be alive.”  It’s perfect because you can say it ironically or you can say it seriously… or both.  Today is a gift.  That’s why they call it the present.

p.s. I love the picture at the very top here!  Gavriel Zev was staring into one of the binoculars on the Aish HaTorah rooftop, and I loomed up in front of the thing with a huge grin, blocking the view and making him shout “Hey!”  And then I realized that the image of me on the wrong side of the binoculars would make a fantastic meta-selfie.  I was hoping for some kind of landmark, Al-Aksa or the golden dome, just as a point of reference, but honestly – the landscape is fine without them.