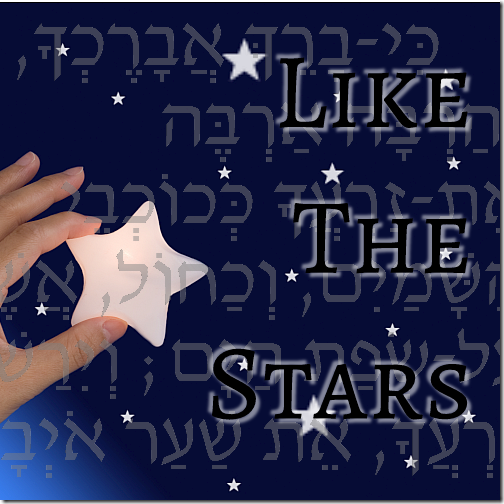 In this week's parsha, Lech Lecha, Hashem says he'll make Avram's descendents like stars.  We often crow about this – “We're so great,” we say.  “We're just like stars.”

And no wonder.  We get off to a roaring start this week.  You’ll forgive me if I’m thinking about outer space – I just saw the movie The Martian last night, and I think stars are totally awesome right now.

But so – obviously – does Hashem.

Yet that isn’t the most mindblowing thing about this week’s parsha.  It opens with the most promising beginning, of any story ever told.  Hollywood has nothing on this.

Listen to this:  Hashem takes a homeless guy.  Literally.  He’s just been evicted, because he refused to follow the local religion in Ur-Kasdim, where he grew up.  He’s not a young guy, either.  He’s very, very old, and so’s his wife.  They have no children.

So Hashem takes this homeless, barren man and makes the two biggest promises of history.  “You’re going to have a land; not just any land, but the best land ever, the centre of the universe.  Oh, and you’re going to have children – lots and lots of children.”

Really makes you sit up and listen, doesn’t it?

So listen to this, too, while I’ve got you here:  Hashem also says he'll make Avram's descendents like the dust of the earth.  Um, okay.  Now that’s a bit of a comedown.  Who wants to be like dust?  That's totally not worth much.

But here's the thing the Baal Shem Tov taught us about stars:

stars look small from a distance, just tiny specks, but we know that they are really, up-close, very huge.  (If you want to see how huge it all is, go see The Martian!)

People in this world, the Baal Shem Tov said, may look small and insignificant.  But in reality, every single person has his or her own greatness.

We must treat other people and honour them as though they were stars.  Other people may look small to us, but they are, in reality, the gigantic centre of their own universe.

"The Chassidic master Rabbi Simcha Bunim used to say: "Everyone should have two pockets. In one, there should be a note that says בשבילי נברא העולם/bishvili nivra ha'olam (The world was created for me). (Sanhedrin 37A) In the second there should be a note that says אנוכי עפר ואפר/anochi afar va'efer (I am dust and ashes). (Genesis 18:27) This is a teaching about how to live a balanced life."*

As Avraham's descendents, we are both stars, the centre of our own universe, and dust, trampled on by every nation, wherever we go.  Awesome and humbling, all at once.

The word בשבילי / bishvili, of course means “for me.”  But I saw a playful little vort (small dvar Torah) online that plays on the Hebrew word tucked into the centre of the word:  שביל/shvil – a path.

Bi-SHVIL-i, then, could mean, “in my path,” an idea very comparable to the Jewish concept that there are 70 faces to the Torah; that each one of us has our own way of understanding the Torah and walking with Hashem.

Now, a path, as we all know, is only dust and earth.  Pretty humble.  But arguably the most famous shvil of all is… שביל החלב/shvil hechalav, the Milky Way galaxy (in Hebrew, the “milk path galaxy”).  Which is made, of course, out of stars.

And that – well, that’s Jews for you.  Feet on the shvil, the path Avraham started us on so many thousands of years ago.  And head in the stars, boldly going, so to speak, where no one has gone before.

Have a great Lech Lecha!

*Inspiration & quote borrowed from this Julie Geller song that Google found for me to enjoy tonight. (kol isha)