Jews and Jobs: MAMALAND REVIEW of Can I Wear My Kippah on Job Interviews?: Career Guidance for Sabbath Observant Jewish Professionals, by Lavie and Rachel Margolin 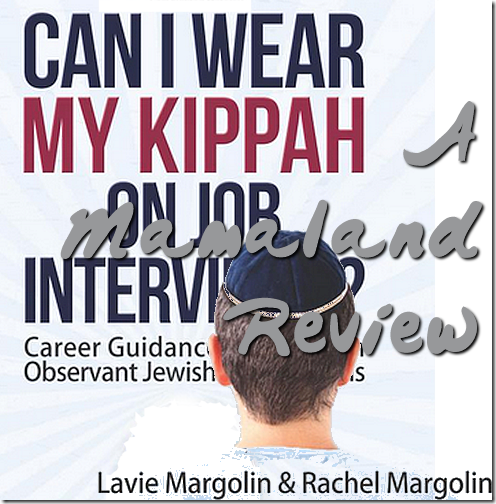 Should you wear a kippah to your job interview? Well, yes.  In the year 2015, except in some places in the world (most of which don’t speak English), if you're a person who wears a kippah, you shouldn't NOT wear it if you're going to a job interview.  I mean, who would do that?

When I saw a book called Can I Wear My Kippah on Job Interviews?: Career Guidance for Sabbath Observant Jewish Professionals from two authors who have built a business creating business- and employment-consulting books, it caught my attention right away (which I think is the point of the title).  I eagerly requested a review copy, and the author, Lavie Margolin sent one along.

First of all, the book isn’t really about wearing a kippah or not.

I quickly came to the conclusion that the cover question is mainly an attention-getting trick.  The Margolins never advise removing your kippah for a job interview – perhaps because they know that that would alienate too many readers.

(At one point, the book even mentions wearing a kippah or headcovering specifically for an interview or at a job, even if you don’t normally wear one, if it will make you more comfortable or better accepted working in a religious setting like a school or shul.)

The title sure does make a splash, though.  When I mentioned the book on facebook, one person simply saw the title and replied “OF COURSE! ARE YOU ASHAMED OF BEING JEWISH?”  Others were more calm, but immediately pointed out the inconsistency, with a few saying something along the lines of “it would be dishonest to present oneself as non-religious and then make any religious demands of the employer once hired.”

Someone suggested that “It doesn't have to all come out in the first meeting, but probably at some point in the interviewing/hiring process,” which is exactly the line taken by the authors of this book, who discuss at which point in the hiring stage it’s best to ask for Shabbat and holidays off.

So if the book isn’t just about whether or not to wear a kippah to a job interview, what is it about?

Mainly, sticky issues that come up for observant Jews in and around the workplace (which would have made a lousy title, so there you go).

What sticky issues?  Things like job interviews or meetings late on Friday afternoons or even Shabbat, going out to lunch with coworkers or clients, work-related travel, and a lot more.  With a degree from Yeshiva University, one assumes the author (and his wife, the book’s co-author) knows what he’s talking about, and in the introduction, he mentions that he’s worked with “over one thousand observant Jewish professionals.”  That’s a lot.

The best part of the book are the numerous, well-summarized “case studies” of actual clients who have turned to Margolin for advice.  These are very well written and concise.  I would have loved to read more of them.

In some ways, the book is very basic.  It includes practical considerations for choosing a career, which would make it a terrific gift for frum kids just graduating high school or preparing to choose a career path.  Some of these include evaluating the typical work hours in any potential profession, geographical locations where you’re likely to find a job.  If the only jobs are away from big Jewish communities, he says, “This can get a bit tricky for observant Jews to whom being active in the Jewish community and the proximity of yeshiva is of the utmost importance.”

Choosing a career may include getting an education:

Before entering a degree program, make sure you know the career options available to you upon graduation. Some schools market a certificate or degree program as the pathway into a career, but fail to mention the number of graduates who actually achieve that goal. For example, there are law schools that inflate the statistical number of graduates who are currently “employed in the legal field.” They do so by offering low-paying, administrative assistant jobs at the law school to those who’ve yet to land the more prestigious positions in the field of law. Hence, applicants are misled both by these statistics, and as to how the degree is actually serving graduates.

This type of advice is more useful before you start out on your career, but it’s also helpful for moms upgrading their education to re-enter the workforce.

Can I wear a kippah… weighs the pros and cons of working for companies that are themselves observant, and offers many practical tips for working around potential problems in companies that are mostly non-Jewish, in areas like food, socializing, leaving early for Shabbat, tailoring a job search around the Jewish calendar, and even things you might not think of, like adapting dress codes to the Jewish requirements of tzniut (modest attire) and shomer negiah (not touching a person of the opposite sex).  The authors offer a few fun, creative ways to get out of a handshake, but generally suggest a forthright, honest approach.

There is also a section dedicated to using contacts within the Jewish community for networking, and some ideas about how to tell if a connection is going to be able to help or not.  This may come down to basic “people-reading” skill, but it’s helpful here nonetheless.

One point I found fascinating, mainly because I’ve never considered it before:  non-Jews might not “get” observant Judaism, at first.  Even the core concept, that seems obvious to Jews, that “actions that don’t hurt other people can still be seriously prohibited, might be confusing to someone unfamiliar with halachic Judaism.”

The book also points out that – as “different” as women may feel wearing a sheitel – non-Jews don’t usually notice them:  “Typically, non-Jews rarely notice that a sheitel or a fall is a wig because it is just not on their radar.”

All in all, there are enough nuggets in this book that I’d recommend this for any frum job-seeker.  It’s a quick read:  if I’d paid the full $15 for the paperback, I might feel ripped off.  The Kindle edition is only $6.99, and free to borrow with KindleUnlimited, so it’s a much better deal, especially if you’re out of work.

If you’re expecting a “black-hat” type guide to Jewish observance in the workplace, this book isn’t it.  In most cases, it defers to your personal comfort level, as with an anecdote about a woman who didn’t normally cover her hair but who did (slightly) for a job interview with a Modern Orthodox shul.  This doesn’t bother me; others may prefer something which carries more halachic authority.

What did bother me about the book were the prevalance of tiny irritating spelling and grammar mistakes.  The book could definitely have used a good going-over by a professional editor (did I mention I’m a professional editor?).  Considering that one of the main stereotypes about religious Jews is that they are poorly-educated and ignorant of spelling and grammar conventions (also one of the stereotypes about self-published authors!), I would have hoped the authors would pay more attention to this.

Nevertheless, there’s a lot of value in this book.  I’d recommend it as a gift for any religious young person who’s either finishing high school or starting university – or graduating university and embarking on his or her first professional job search.  But, for the Kindle price, at least, Can I Wear My Kippah on Job Interviews? has a lot to teach us “old dogs” as well. 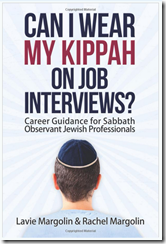