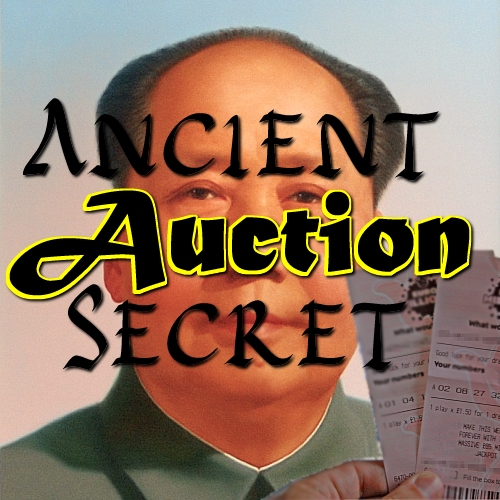 It seems that even in an era of political correctness, within certain circles, this term just will not die.
And frankly, I’m mortified.

I’m not Chinese, but I have family who is Chinese.  Some are Korean, as well.  I guess this makes us more ethnically diverse than many Jews, but I suspect most Jewish families are moving in this direction.  Still.  Even if we don’t know a single Chinese person, we should still stop calling it that.

First of all… is it actually racist to call it a Chinese auction?

I figured I’d let Chinese people decide.  But when I turned to Google to find out how Chinese people feel about Chinese auctions, what I found was mostly… nothing.  Silence.

I did find some debate (presumably among non-Chinese people) over whether it was too far in the direction of political correctness to refer to these as a “silent auction” or (as in some parts of the States) a “tricky tray.”  (Okay, that’s just weird.)

One guy reacted by saying, “You say something ‘Politically Incorrect’ and people look at you in horror as though you just killed a kitten.”

However, another person on the same thread said, “the term is tied up with a lot of other negative characterizations of Asian culture as being mystical in contrast to Western culture being rational.”

That’s my understanding as well – that Chinese people (and Asians in general) were assumed to be sneaky characters, always hiding something.  Hence the racist “ancient Chinese secret” TV commercial (see the video below).

This discussion on a Jewish site yielded absolutely no philosophical depth whatsoever.  When asked if it was racist, the first guy just said, “No.”  Another volleyed back by asking if a Dutch Auction is racist.  (I had never heard of this, but apparently, it’s mainly an investment thing.)

While “Chinese Auctions” may have once been common, today, many English speakers outside the religious Jewish community don’t even know what these are.  That’s because almost everybody calls them something else these days.  Meaningless political correctness or not, they have moved on and nobody really minds all that much.


I suspect this happened not because of political correctness but because they started to call it a Chinese Auction and then thought about Chinese people they knew and wondered, just for a second, if it would offend them to call it that… so they didn’t.

Here in the Jewish community, we don’t know that many Chinese people.  And we tend to be set in our ways a little more.  Like Eisav and David Hamelech’s red hair, that can be a good trait and a bad trait.  It means sometimes we stubbornly cling to beliefs like “we’ve always called it a Chinese Auction, so it must be okay” (not true; the term wasn’t prevalent before the 1940s, so it’s not like Moshe Rabbeinu ever participated in one), and “nobody Chinese will find out, so it must be okay” (not true; many Jews today are also Chinese, even if you may not know any).

I’ve been asking Jewish organizations for years to consider NOT calling it a Chinese Auction.  The biggest I can think of is the New York-based Oorah, which now just refers to its event as the “Oorah Auction.”  Everybody knows what they’re talking about and how it works; I don’t believe they’ve lost any participants by dropping the word “Chinese.”  Maybe they’ve even gained a few.

When I mentioned this online today, to an organization that was planning to hold one, someone asked “What bothers you about the term Chinese? Is it as Chinese as French Fries are French?”

This was annoying.  I dislike when someone recasts a general objection like this as my “personal pickle,” as if no-one else could possibly share these views.  It’s condescending.  Plus, French Fries kind of ARE French (though the Belgians apparently disagree).  Whereas there is no evidence that a Chinese Auction has ever actually been held in China.

She also pointed out that the language is full of inaccurate stereotypes like this.  Which is true; I couldn’t believe it the first time I heard someone actually SAY that they’d “Jewed” someone down.  That really drove it home for me.  The fact that these racist stereotypes exist doesn’t mean it’s all in good fun to keep using them.

I would love to let actual Chinese people decide this issue.  But since they don’t appear to be speaking out en masse, I believe we should, in deference to Chinese Jews and non-Jews among our near and dear, and also in deference to our own sensitivities, which should be alert to careless racial references.

The rest of the world has moved on, leaving the Jewish community looking foolish and stuck in the mud.  When there are other, better terms, the choice is clear.  Jewish organizations shouldn’t use the term “Chinese Auction.”

Why?  Let’s sum up:
The term “silent auction” does the exact same job as “Chinese auction”… in a lot nicer way.  Think I’m totally off base?  I’d love to hear from you either way in the comments section.