The Jewish Defense League – why they don’t speak for me (or you?). 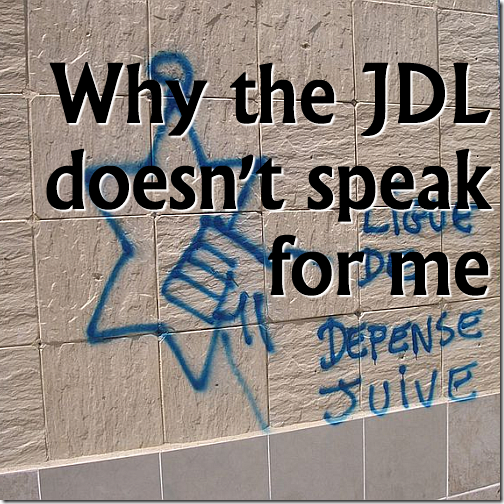 I just got flamed on Facebook – now that’s something that doesn’t happen often.

(My life’s pretty boring, I guess.)

But when I saw this story in a Facebook group, about the Jewish Defense League setting up shop in Montreal, I mentioned that I found their tactics "disgusting."

Apparently, it was the wrong thing to say.

Apparently, for criticizing those who hate the haters, I become hated myself.

I was attacked on all sides by my fellow Jews who offered such threats as:

These comments tell me everything I need to know about the JDL, its supporters and their tactics – today and in the past.

The JDL Canada website proudly brags about how they helped arrest Canadian Holocaust denier Nazi Ernst Zundel.  They should be proud.  But they don’t mention that they also tried to burn down and bomb his house.  They don’t mention Baruch Goldstein, a JDL member who murdered 29 praying Muslims.  Or many other JDL-initiated murders and murder attempts over the years.

Years ago, the JDL made its name in the U.S. with acts of terrorism aimed at Soviet targets with the goal of liberating Soviet Jews.  They’re proud of that, too.  Look, the Soviet Jews are free now, they say.  We did that.

Still, it doesn’t look like they’re proud enough to broadcast the part about the bombings, or shootings in cold blood, on their home page.

If we're trying to strengthen existing laws against crimes and violence, that's one thing.  But if we're going to go against the law, around the law, above the law, that's something entirely different. This lowers us to the level of our enemies.  Lower, even, because we’re Hashem’s people and yes, He expects better of us than of others.

On Facebook, everyone leapt to defend the JDL because they're "making galut [exile] safe."  Interestingly, most were Jews who live outside of Israel.

It’s a fascinating argument to make because the JDL actually agrees with me that “making galut safe” isn’t our ultimate goal as Jews.  They say that “the true solution to the Jewish problem is the liquidation of the Exile and the return of all Jews to Eretz Yisroel – the land of Israel.”

Funny how they use the words “the Jewish problem.”  I’m sure it’s no coincidence.

Ironically, even though they think the Shoah was a bad thing, it doesn’t seem like they’d mind turning around and “liquidating” the Arab inhabitants of Israel in much the same way… along with anyone else who gets in the way of that return from exile.

As much as I love Israel and feel we belong here, I can’t help thinking there are better ways to accomplish it.

Yes, the Jews did conquer Israel in the Tanach.  Yes, Hashem rewarded Pinchas who was, the Torah says, “zealous” in his name.  But the Tanach was never a prescription for universal violence.  On our way to Israel over the 40 years in the desert, Hashem was the one who told us when to fight, when to go around, when to make a deal to cross hostile territory.  Lacking that level of divine guidance, I don’t believe massacres are the only solution.

Organizations like the JDL disagree.  They see violence as a divinely commanded imperative.  Why?  Because they’re viewing the world through antisemitism-coloured glasses.  That’s their mandate.  To find antisemitism and do something about it.  And what they choose to do about it is worse, at times, than the hatred itself.

I suppose I’m biased because I don’t believe in hate crime.

I don’t believe it is (or should be) a crime to hate anyone.  You can do all the hating you want.  Hating is nice and quiet, at least in the beginning.  It’s when you decide to get up out of your armchair, leave your house and do something with that hatred (like shooting 29 Muslims at prayer) that I believe you should be stopped.  If I hate you my whole life but never speak up and never attack you, then I have lived my life as a good person.

There are laws preventing violence, and if those laws need to be strengthened, then I’m all for that.  However, the JDL doesn’t act like it’s particularly interested in changing laws.  It is interested in controlling every area where Jews live under its own iron fist and in speaking for Jews with its own unique hate speech.

The JDL does NOT speak for me. 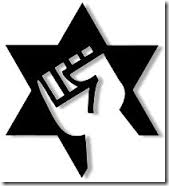 The JDL says it’s “committed… to the abolition of hate and bigotry.”  Good luck with that.  One thing’s for sure:  with a mission statement like that, you’ll never be out of a job.

However, for an organization dedicated to abolishing hate and bigotry, the organization itself has shown a lot of that over its history.  Its founder & first leader, Rabbi Meir Kahane, built himself an entire political platform based on it, until he was eventually kicked out of the Knesset for racism.  (He was later tragically assassinated for his views.) On one of their posters when they were trying to organize support in Montreal, it says:

“Never again” is actually the official motto of the JDL.  And by creatively borrowing language of the Shoah, they’re defaming the Jews of pre-Shoah Europe.  How?

These statements suggest that if those Jews had been less meek and more resistant (if, say, tough Jews like the JDL had existed then), that they could have "won" against the Nazi enemies.

This is way more than a ridiculous assertion; it is a dangerous attack on the Jews of Europe.

Since the people it mostly defames are (mainly religious) Jews who “went meekly” (like sheep), as opposed to (largely non-religious) partisans who “fought back” (like heroes), then essentially this fiction deprecates the memory of Torah Judaism in Europe.

If only it was that simple.  But we know it wasn’t.  The noisy Jews were among the first to die.

On the same poster, they suggest that the JDL will work in 6 different ways, including media monitoring, security, protests… and education.  They say they’re not just going to correct misinformation, but also actually planning to offer “spiritual education.”  I would love to hear more about how they’re planning to do that.

The JDL Canada site does offer a “parsha of the week” which hasn’t been updated since 2013, but which does offer a mix of news and Jewish insights.  Mainly news.

I don’t get political on any of my sites because I’m not interested in politics.  But Judaism is something that interests me very much, especially when people claim to represent “the Jewish position” in one way or another and I don’t agree.

I also know that you may not agree with me.  I’ll listen anyway, if you can tell me politely what you believe.  That’s part of what Judaism is about – talking about how Hashem wants us to behave and why.

Does the JDL speak for you?  Do their principles and actions represent your views?  I’m listening, and I’d love to hear from you in the Comments.