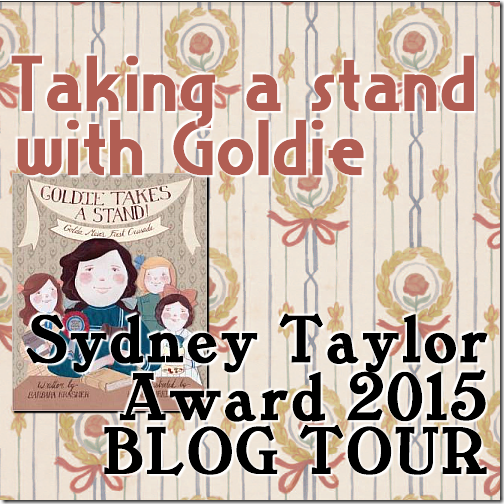 Welcome to the SYDNEY TAYLOR BOOK AWARD 2015 BLOG TOUR, hosted by the Association of Jewish Libraries, in which authors and illustrators of new books share their stories with the world.  The book tour is going on all this week, with tons of great new Jewish kids’ books to discover.  Dig up all the details, including a schedule of events, over here.

So what’s this all about Goldie?

If you know anything about Golda Meir, you’ll know that she was one tough cookie, even before she became Israel’s fourth Prime Minister, and the first woman (and to date, the only woman) to serve in the role.  But you may not know much more than that.

I was surprised when I first heard a recording of her speaking perfect English; I’d assumed that she was either born Israeli (rare in those days) or obscurely European.

I had no idea that, although born in 1898 in Kiev (today, in Ukraine, but then part of the Russian Empire), Meir grew up in the heartland of the U.S., in Milwaukee.  Now, English-speaking kids have a rare chance to find out more than most adults about one of Israel’s most beloved leaders with a new book by children’s author Barbara Krasner:  Goldie Takes a Stand (Kar-Ben Publishing:  2014).

The Association of Jewish Libraries named 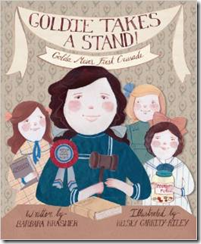 Goldie Takes a Stand as one of six Sydney Taylor Honor Books for 2015, and I was excited to have the chance to interview Krasner, along with illustrator Kelsey Garrity-Riley, about the book.

Before I had a chance to get to that, though, I asked Naomi Rivka (age 9) to tell me what she thought of the book.  “I like it a lot.  Like, ten stars out of five.”  (I think she may have been exaggerating a little!)

What’s the story about? (a kid’s perspective)

I didn’t want to let her get away with such a vague review, however, so I asked her to tell me what she liked.  I was pretty impressed with what she remembered of the story:

“It has an interesting story about helping the poor.  It tells you that she was a great tzadekes and she had to help the poor.  It was her job and if she didn’t do it, who else was going to do it?  So she set up a group of girls to buy books for poor people.  If the poor people got the books, they would be very happy.  So Goldie thought she would help the poor so much and make them happy, so that they can learn what they need to learn and they don’t have to just sit there bored.”

(I guess all those years of homeschool narration have sort of paid off after all, even if she isn’t using it at school.) 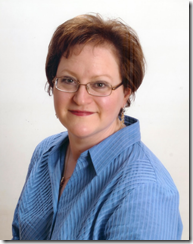 Interview with the author, Barbara Krasner

Barbara has written so many Jewish kids’ books.  I actually just had a chance to flip through another new one, Liesl’s Ocean Rescue (Gihon River Press: 2014), when I met with its illustrator, Avi Katz, at the Jerusalem Book Fair on Monday.

Here’s my Q&A with Barbara, to tell you a little about the process of creating Goldie Takes a Stand.

Q:  I love the idea of a story about a Jewish role model acting as a role model and community leader even as a child.  How did you come across this story?

I was attending a two-week writing retreat at the Highlights Foundation in Pennsylvania. We had a break over the weekend and I was attending the annual reading of the Moses Seixas-George Washington letters of religious tolerance at the Touro Synagogue in Newport. I grabbed Golda’s autobiography off the farmhouse shelves to give myself a reading break while in Rhode Island. It didn’t take me too many pages to realize I had to write about Golda’s Milwaukee fundraising episode when she attended the Fourth Street School.

Q:  As a mom and as a kids' book writer, I enjoyed how this story shares an important Jewish value through the day-to-day lives of ordinary kids.  Did you find it tough to hold back from heavy-handed moralizing to let your characters just tell the story?

This was the first instance where I heard the character’s voice. Golda’s voice was so strong and that’s why I wrote the text in first person, unusual for a picture book. I tend not to moralize, because I think I’m still a kid myself.

Q:  Is this the start of a series?  Do you have more books planned about other Jewish role models?

I wish this was a series! I have written a couple of other picture book bios and I’m shopping them around. 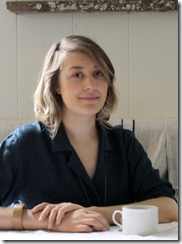 Interview with the illustrator, Kelsey Garrity-Riley

More than almost any kids’ book I’ve read and reviewed lately, I also really wanted a chance to hear from illustrator Kelsey Garrity-Riley, because the illustrations really add a lot to this book.  There’s so much real-life period detail and texture, with different wallpapers on almost every single page. 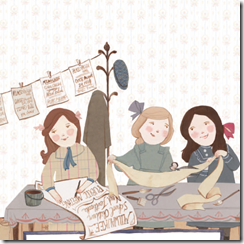 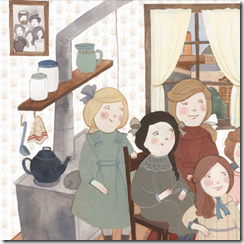 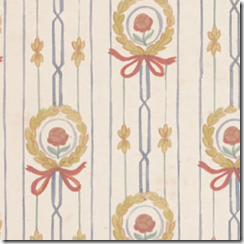 Q:  You probably had very little to go on, in terms of actual photos of Golde Meir as a child.  Did you find that limiting?

There were only a few photos of Godlie to go off of, and at first that was a little frustrating! But I think those few photos ended up being the perfect starting place for developing the characters, filling in the rest of the look with imagination and historical research.

Q:  The images in this book create a strong period "mood."  (eg the wallpapers, fashions, etc) What inspirations did you turn to for guidance?

It was so fascinating looking up images of what daily life would have looked like. Even though there are no photos of Goldie's actual home at the time I was able to look up photos of other apartments from the time period, and referenced catalogues from the turn of the century for what things like lamps, clocks, wallpaper etc. would have looked like. Something that was interesting to consider is that they would not have had all the newest most modern pieces- so often I had to reference objects from a few years earlier. It was fun and a bit exhausting to have to research every element.  Even down to how would eggs have been sold in their shop- it turns out that the egg carton as we know it wasn't invented until 1911, they would have used wire egg baskets. I learned so many interesting little things like that through the process of illustrating this book! 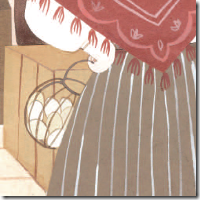 Q:  Your name suggests that you aren't necessarily from a Jewish background.  Was this your first specifically Jewish project?

This was my first Jewish project.  I feel very honored to have been chosen to illustrate the story and I think I did have some nervousness about communicating the story of this Jewish family to a Jewish audience. I wanted to make sure I did the story justice! I was only vaguely familiar with Golda Meir before working on Goldie Takes a Stand, but am so grateful for the experience as I got such an insight into her life and into what life looked like for this Jewish family in turn of the century America!

Disclaimer:  As with most of my review books, I received an electronic copy of the book free from the publisher in return for an honest review.  Also, Kar-Ben Publications, the publisher of Goldie Takes a Stand, will be publishing one of my children’s books in the near future.  (Yay, me!)  Maybe I’ll even be included in the Sydney Taylor lineup one of these years… :-)

I hope you’ve enjoyed meeting Barbara and Kelsey and their wonderful new book as much as I did.  Remember to check out all the other award winners over here.