Refuah Sheleimah? What we can daven for when someone is dying. 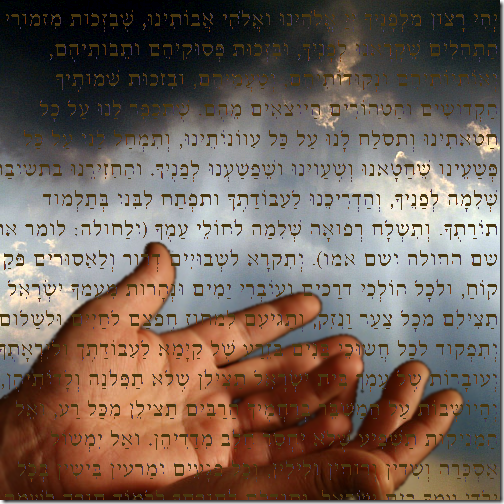 Many years ago, my coworker’s mother was very, very sick.  She was in a coma.  I asked him his mother’s Hebrew name.  And here’s the thing that stopped me in my tracks.

This guy wasn’t religious.  At all.  He knew very little about Judaism and I only knew because it came up in conversation once.  Still, he hesitated.

He said, “She’s really very sick.  I don’t know if it would be a good thing for her to live any longer.”

On some level, even if he didn’t know exactly how, he must have believed that our prayers actually work.  So do I.  But what are we talking about when we talk about prayers “working”?  About Hashem “answering” them?  And what are we asking for, to begin with?

In that situation, I explained that we’re not just asking for the person to live longer.  But this is something a lot of people don’t understand – even those of us who are doing the davening ourselves.

Sure, we all have that impulse, when we find out someone’s sick, to say something automatic like “refuah sheleimah,” a complete recovery, a speedy recovery, a long life.  These are the generic things we wish for everybody, and saying it comes as easily as saying “bless you” after a sneeze.

But for a person who’s clearly dying, there are other prayers we can and should be offering instead.

A person who is dying is known in Judaism as a “goseis” (גּוֹסֵס).  There are limits, halachically, to what you can do to and for such a person.  From what I understand – and in case you forgot, I’m still NOT a rabbi, though I did once want to be one – you’re supposed to leave the person alone as much as possible.  Not alone, alone, but you’re not supposed to mess with them, physically.

You can’t do anything to make the process go faster and – please understand, this is to be decided by a competent rabbi – you can’t do certain things that might stop them from dying.

Does that include wishing them a refuah sheleimah?  I guess that depends on whether or not you believe Hashem answers prayers immediately, giving us exactly what we ask for.  Usually, I don’t.

What you are allowed to do, by the way, is remove obstacles – to get rid of anything that’s stopping the person from dying.

Again, you’d have to talk to a rabbi to find out exactly what that means in any specific case.  The gemara, I think (or perhaps the Rema), gives the example of a woodcutter whose chopping noise is keeping the person in this world, distracting him from the task of dying.  You’re allowed to tell the woodcutter to cut it out (so to speak), to give the person a little peace and quiet.

Some questions about prayer for a person who’s dying are troubling, if you look at them head-on.  Especially the question of whether we can daven for a faster death.

Rabbi Avi Shafran writes that “there is immeasurable value in human life itself -- even in its minutes and seconds, and even when it is fettered by infirmity, immobility or depression.”  We don’t know, he believes, at what point a person’s life ceases to be meaningful… and thus, we aren’t the ones who get to say when it’s over.

Going back to the first question, my coworker’s question, is whether we’re allowed to say Tehillim if we believe it’s going to prolong a person’s life?

I think that’s the wrong idea about Tehillim, and about prayer in general.

We’re not closing our eyes and wishing over a birthday cake.  Hashem isn’t the Lucky Penny God, where you rub him the right way and he’ll satisfy all your earthly desires.  Halevai, as folks say in Israel.  If only.

But there are other things to pray for.  I think these are often the most important things after all.

When we say Tehillim, or daven for a person, we shouldn’t just be thinking “complete recovery” or “speedy recovery” or “get well soon.”  Though it’s nice to be optimistic, we probably shouldn’t picture a person on her deathbed leaping up and dashing out to 7-Eleven for a Slurpee.

Here are some other things – and perhaps better, more meaningful things – that you can keep in mind and focus on when you’re davening or saying Tehillim for somebody who’s very, very sick:

Let’s go far, far beyond that, davening that obstacles should be removed, and that the process should be as smooth and safe and filled with love as possible.