Ashley Martin: A heartbreak… a disaster… a homebirth…? 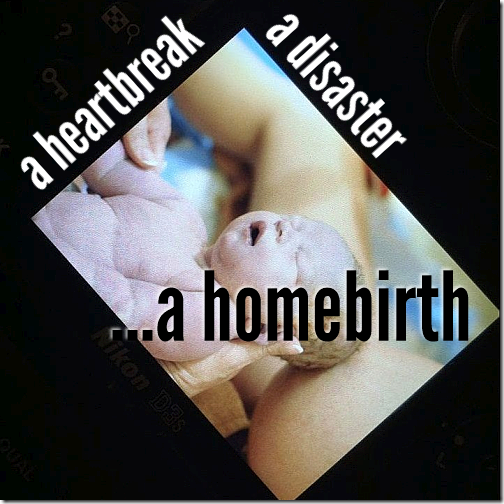 Maybe you’ve seen this PopSugar article in which a mother denounces her homebirth experience.  Everyone assured her that she was low risk, but she had a painful, long labour which ended in a floppy oxygen-deprived baby who had to be transferred to a hospital NICU.  She ends her article begging, “I do not want to be the poster girl for home birth. Please don't make the same mistake I did.”

According to the mom, Ashley Martin, nobody should have a homebirth.  She says , bitterly, “I was misled, lied too [sic], and manipulated. Informed consent? Hah. I wish.“

I’m so, so sad for this mama.  And I am relieved that her baby made it.  That he is a spunky 16-month-old today.  But, as she says, “just because my son is okay, does NOT mean that my home birth was okay.”

Still, I wonder if this is really about homebirth at all.

Birth, as normal as it is, and as much as we must trust the process and let our bodies do the work of labouring, is a difficult and – yes – a dangerous time.  Nobody should ever tell a mother anything else, and my heart weeps that everyone told Ashley that by empowering herself, she could guarantee a glowing, harmonious birth experience.

The thing is… birth is dangerous no matter where you do it.

I had two hospital births and two homebirths.  One of my homebirths sounds eerily like Ashley’s, at least the part about the bathroom floor and the baby not breathing.  In my case, the happy ending was that my husband called 9-1-1 right away, and by the time the firefighters tromped up our stairs just a few minutes later, the baby was fine, and all I wanted to do – in reply to their offer of a hospital transfer – was go to bed.

Oh, yeah… we also had to call them for homebirth #2, but that was for me; I lost too much blood.

That time, they didn’t let me say no, they whisked me out to the ambulance and sent me there – my midwife clutching the placenta and riding along, me screaming at my husband to bring the naked, brand-new baby in the car right behind the ambulance.  (He did; I seem to remember they were there when I got to my hospital room.)

Thank God, we survived.  My baby is now a spunky 7-year-old (these days, we insist that he wear underpants) and I am his proud mama.

These were both low-risk pregnancies in which emergency medical services needed to be summoned despite everyone’s best intentions.  By the way, these happy endings don’t prove the FAILURE of homebirth… in my mind, they prove its success.  That everything was in place, the emergency services, the transfer, the hospital.  Everything was ready and waiting for us, just in case.  That is a success story.

But some people still disagree.

This blog post by another mama, listing “10 reasons I'd never ever ever have a home birth,”mentions that babies don’t die “die preventable deaths” in hospitals, while “at a homebirth, at least two out of every three babies that die die for causes that would not have killed them in a hospital.”

She’s completely wrong.  Babies born in hospitals suffer, too.  They die of preventable things.  How could they not?  In hospitals, babies are induced as early as 35 weeks for doctors’ convenience (see the comments from nurses and other medical professionals to the original post if you don’t believe this happens).  Other unnecessary and compounded interventions lead to damaged babies and poor outcomes for mamas.

(It’s strange how not being able to move or take care of your baby for weeks after a c-section isn’t considered a negative outcome.  In my book, that’s huge.  Not life or death, maybe, but still major when you have a newborn who needs you.)

The idea of “medical economics” seems heartless at first.  No baby should die unnecessarily, right?

Ashley warns, “You might be 'low risk' one second and 'high risk' the next second.”  Therefore, she suggests, one should take all available precautions.  But that route is impossible, unfeasible, and has bad potential outcomes of its own.  It’s like medication – there are side effects of every medical decision made during pregnancy and birth, and those side effects can and do cascade, going – just as Ashley says about homebirth – “downhill REALLY quickly.”

But sometimes, doing more – offering more interventions and having more assistance “at the ready just in case” – really does harm mothers and babies.  (This is true in other areas of medicine, too, and doctors are more and more taking a hands-off, “watchful waiting” approach rather than leaping in to intervene.)

Babies and mothers in hospitals are vulnerable.  This study says that in 2002, 19,059 healthy newborns picked up “health care-associated infections” in the U.S.  These statistics do improve with rooming in and with earlier discharge from the hospital – but they wouldn’t exist at all if the baby wasn’t in the hospital with the infections in the first place.

Of course, babies at home are also vulnerable.  Babies can die from contaminated water in water births, or as a result of mishandling or the hubris of unqualified, inexperienced midwives who insist on handling situations like breech births that are out of their league.  My own homebirths took place in Canada, so there are probably a few differences, including excellent, all-included prenatal care, along with certified, regulated midwives with admitting privileges and a very high degree of cooperation and oversight.

In any event, this isn’t about statistics, it’s about birth experiences.  Going back to the original article, it’s clear one mama had a nightmarish experience.  I’m sad and sick and sorry that she had to go through that.  Anecdotes like Ashley’s are compelling reading… but they’re not science.

I’d love to hear what you think.