No, we’re not all the same (even though I wish we were) 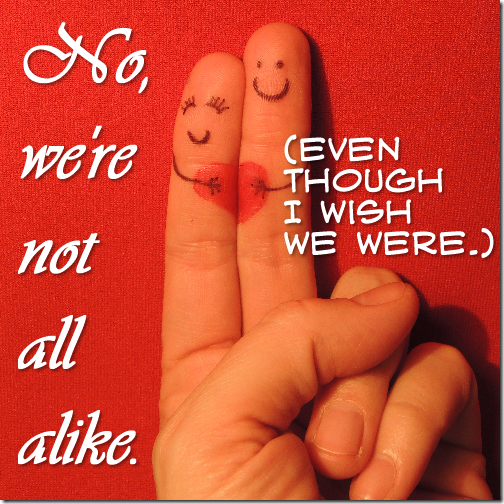 “What might save us, me and you… is if the Russians love their children, too.”  Singer / songwriter Sting wrote that near the end of the Cold War, when we still thought Russians were going to be the death of us (listen here or watch it below).

I came of age with these optimistic words ringing in my ears – and the assumption that, since our enemies are just like us, we’ll ultimately find peace.

I hate to say it, but Sting lied to a whole generation of us.  We’re really not all the same.

A friend said in a dvar Torah last week that while Migdal Bavel (the Towel of Babel) was being built, the builders had tremendous unity of purpose.  They were all working together in harmony. It was the first and last time all the people of the world worked together with such clarity.

So why did Hashem object, to the point of smashing the tower and scattering the people?

My friend explained that if one of the builders fell down from the tower to his death, the others wouldn’t cry.  No big deal; they had lots of people.  If a brick fell down, however… it was the end of the world.

At the time, bricks were the hottest new technology.  They’d just been invented, and they were hard to make.  There were also no sophisticated modern ovens, so bricks tended to be fragile and crumble easily.

Bricks were valuable.  People were throwaways.

You wouldn’t believe anyone was like that today, would you?  Like Sting says, we’re all basically the same, with the same values, right?

Reluctantly, I don’t think so anymore.

A few years ago, I volunteered for a bone marrow testing drive in Toronto.  A young man in the Jewish community needed a bone-marrow transplant.  He would die without it, and his best chance for a match was among other Ashkenazi Jews.  The test was easy and painless, a simple cheek swab.

I spent the day at the JCC, and we were swamped.

Hundreds and hundreds of people came out in a single day to sign up.  We could barely keep up with the demand for swab kits.

A couple of weeks later, I heard about another bone marrow testing drive.  A doctor and beloved professor in Toronto’s medical school, of Bengali Indian heritage (the kind that comes from India), had a similarly urgent need.  His best chance of a match, too, was among others of his own background.  At the time, there were 700,000 East Indians living in Canada.  Easy peasy.  One of them was bound to be a match.

I volunteered; why not?  It was easy enough to help, and he deserved a match no less than the Jewish recipient.  I was given directions to an Indian community centre just north of Toronto, and showed up early to prepare for the onslaught.

Instead of hundreds, we were lucky if there were dozens, and many had wandered in by mistake.  I was assigned stair duty, pointing the way up the stairs to the testing room.

If a pointer points in a stairwell and nobody is there to see her, does it still count as an earnest effort to save a life?  I really hope it does.

Towards the end of that discouraging day, I asked one of the organizers, a twenty-something Indian guy, why there wasn’t a bigger turnout.  What he said shocked me.

He shrugged.  “In India,” he said, “there are so many people.  Probably too many people.  We can’t care about a single life, it’s like one person isn’t all that valuable.”

He thanked me very nicely, and I drove home, reeling from that truth, and grateful to be back in my own Jewish neighbourhood.

I grew up Jewish but not religious, yet even before I was an adult I knew of the Talmudic idea that “whoever saves a single life has saved the entire world.”  I knew that every single one of the six million of us who died in the Shoah was absolutely precious and unique.  And that I had an obligation to save every single life I could.

I think too many of us still cling to this idea that “deep down, we’re basically all the same.”

We Jews may not always get along.  Okay, that’s probably an understatement.  I live in Israel, a country with more than thirty-five political parties.  But we take seriously the idea that we’re responsible for each other.  We reject Bavel and assert over and over again that human life is the primary value.

We do this even when it hurts us.  When a terrorist drives his car into a Jerusalem train station, killing a Jewish baby and wounding eight others, Jewish doctors rush to save his life, perhaps the same teams of doctors who working to resuscitate 3-month-old Chaya Ziesel Braun.  The man who did it was a convicted terrorist who had done jail time more than once. He was released each time, perhaps with the prayers of Israeli officials that if people like him “loved their children, too,” there would be an end to violence at last. “We share the same biology, regardless of ideology,” Sting wrote in his song. It’s a cute rhyme, but the truth behind the words grows shakier and shakier with every new regime that proves him wrong.

As Jews, we are the anti-terrorists; it’s what Hashem picked us for. We embrace life until it hurts. The day we lose sight of that value is the day we become just like the people of Bavel, crying over a shattered brick but shrugging at the loss of a human life.

Yes, it’s painful to pray so deeply for life only to be answered with death and violence. Like me in that stairwell, mystified, we stand and do our job, pointing the way in the wilderness. Too few nations listen and even fewer follow.

Our enemies certainly don’t, and probably never will.

I’d love to hear what you think in the Comments section.  Oh, and I still like the song (with segments borrowed from Russian composer Prokofiev), and you can watch it here: