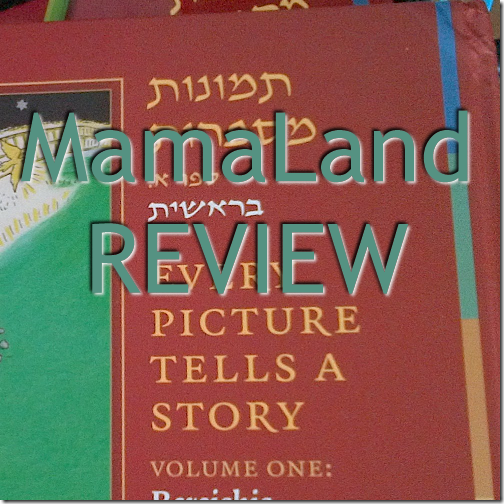 How are parsha books like popcorn?  You can’t have just one!

If you’re anything like our family, you already have a preponderance of parsha books.

But it’s impossible to have “enough,” isn’t it?  Especially when it comes to finding great kids’ parsha books that are both appealing to kids and reflect your family’s hashkafa (religious outlook).  And especially if the author isn’t afraid to do something a little different.  So when the chance to review a new parsha book that combines words and pictures in an innovative new format came along, I got a bit excited.

There’s a good chance that this book may be just right for your family.

For my review, I received free from the publisher both the hardcover Every Picture Tells a Story Volume One:  Bereishis (Menorah Books: 2014) and the accompanying softcover colouring book: 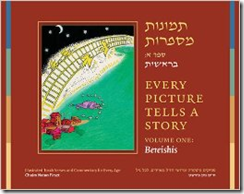 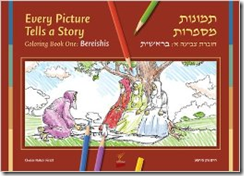 Aren’t those great covers?  They’re bilingual!  And they tell you exactly what you’re going to get inside.

(I don’t love the fact that on Amazon, you can’t use “Look Inside” to peek into the books, but the publisher has previews on their website instead.  Smart marketing would suggest that they include a URL to these previews in the book description on Amazon, because I was not the only one deterred by this.)

Here’s what I loved about the book, right off the bat:

Inside the main book, the pictures are skillfully drawn, but felt like they were lacking something.  My husband, an illustrator, suggested that the colouring was “flat.”   But given the low quality of illustration in general in the Jewish kids’ book world, these actually stand out as pretty good.  They’re way better than the pictures in existing books like The Little Midrash Says.

Who’s the audience for this book?  What ages of kids will it appeal to?

Actually, I worried a bit about that.

The images may be too complex to appeal to young kids, but the idea of sitting down to read a picture book may not be so fun for older kids.

The text facing each image is a very short excerpt from the actual Torah text, with a translation and explanation below.  I really like the fact that the explanations are brief and, for the most part, factual.  However, in a couple of cases I saw, they did veer off into midrash without explaining that they were coming from another source.  Here, Yosef greets Yaakov, who – we’re told in a midrash – is saying Shema so he doesn’t respond.  This text brings the midrash, which is fine, but doesn’t explain that it’s from a different source other than the pshat (plain text) above.  Parents and educators will have to explain where these explanations come from.

However, in at least one notable case, I was happy to see that a midrash was “overlooked”:  unlike in many parsha books, when Rivka comes out to water Eliezer’s camels, she’s depicted as a fully-grown or nearly-grown woman, rather than as a little girl of three, as one popular midrash says she was.  Yay!

And yes, you WILL see girls and women in this book.  (Yay again!)

This is as it should be, since they’re in the Torah itself, but there has been a move in the frum world to exclude images of women, so I was happy to see that this book includes us where necessary.  All the women I noticed are dressed in a way that can only be described as extremely modest – layers and layers of robes and hoods thrown over them – but at least they’re there.

One thing I totally didn’t love:  the traders who take away Yosef are depicted not as Arabs (at least, not any Arabs I’ve ever seen!), but as black.  They have short curly hair and slightly African features.  Not nice at all.  Is this a deal-breaker?  You’ll have to decide for your family.  This was the only such example I found, but it did kind of jump out at me. 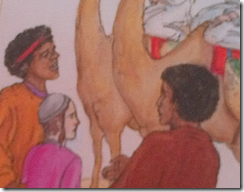 Here are some more sample pages – kind of at random - from the hardcover main book.  Despite a slight amateurish look, the lines of the art are skilful and consistent throughout the book, and the images add a lot to each story.

You can see that the amount of text on each page varies from minimal to a couple of paragraphs.

Within the accompanying colouring book, each picture is accompanied by the name of the parsha and a very short description of the incident shown (“Yosef and his brothers’ jealousy,” “Ya’akov builds his family”).  The pictures are the same as in the main book, except without colouring.

This is probably the richest and most accurate collection of colouring images I’ve seen for the book of Bereishis.  Again, however, I worry that it will have trouble finding an audience, because the pictures are so rich and sophisticated – not well-suited to younger kids who have trouble staying inside lines.

Also, the publishers haven’t provided a way to remove them from the book, which might come in handy for some families and classes.  Pictures are printed back-to-back, which means that younger kids colouring with markers, or older kids using paint, will almost certainly have their colour “bleed” through the page.

I’ve been known to photocopy the pages so a child can work with a clean copy and not worry about wrecking the book.  However, due to copyright, I can’t suggest that here.  (So forget you heard it from me!)

No information is given in the book about licensing the colouring pages for classroom use, so you’d have to contact the publisher if you wanted to hand out copies in a class or even for multiple kids within the same family (hint to publisher:  this is very common in homeschool families, and most publishers seeking to appeal to this market permit it explicitly in their materials).

One huge potential market for this series, which the publisher may not have considered, is “messianic” Jews and other Christians who want to enhance their study of the books of the Torah with richly-illustrated verses, authentic Hebrew text with an accurate translation, and occasional midrashic insights.

If that’s you, I would highly recommend these books.  If you’re Christian and thinking of learning Torah in a “Hebrew” way, it definitely seems more authentic to use legitimate Jewish sources like these books.

The price of the main book, especially for such a slender volume, might be prohibitive for some families.  It looks like the current Amazon price is around $26 for the hardcover Bereishis volume alone.  Shemos is another $26, and presumably so on as others are released.  The accompanying colouring volumes are $8-something.

It’s not that the price is out of line with other parsha books – it’s just that this is a much smaller book than some of the others. However, because it is full-colour, with glossy pages and a high-quality binding that feels very solid, it probably costs a lot to produce, and many will see this as an important investment in their parsha library and their family’s chinuch.

A note about names of God:  every family has their own preference.  This series uses “G-d” throughout.  I haven’t listed this as a plus OR a minus; parents, when reading, can change it up as they like.

The author seems to have made an effort as well to avoid gender-specific language for God (“He spoke,” “prayed to Him” etc).  This may be a plus for some families, but as always, it leads to occasional awkward constructions like “G-d saved him… and G-d’s name was sanctified.”  In general, however, it works well.

As a springboard for further study and exploration, this looks like the start of an excellent series.  Many families have been waiting for something exactly like these books to come along, and I’m very happy to add it to our family parsha library.