Two things that are definitely not “us.” Thing #1. 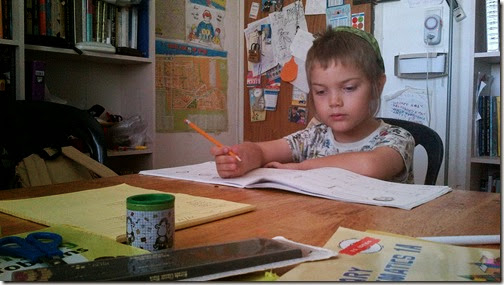 Thing #2 is Tzfat.  A city we love, but will probably never live in.  You can read more about that over here.

It’s hard not to cry as I write this (partly because Windows Live Writer ate my last version of this after I’d spent 10 minutes typing – waah).

I have had the BEST summer, learning at home with the kids.  Learning, growing, exploring, doing cool stuff together.  And yeah, proving to myself that even here in Israel, I’m still me.  They’re still them, albeit now with a touch of Israeli schoolkid chutzpah.

Given the choice, the kids would continue homeschooling, all year long.  Staying in PJs, going on tiyulim, choosing what to learn, how fast, at exactly the right level.

Given the choice, we grown-ups would continue homeschooling, all year long.  Avoiding making lunches, and yeah, staying in PJs.  Missing the chance to throw ourselves on the one-size-fits-all, inexorable conveyor belt that is any education system, even in Israel.

Have I mentioned that I hate making lunches?

Ask any of my kids; it’s true.  Always have.  It doesn’t help that I hate almost all sandwiches and this is a nation that reveres them to the point of mandating a nationwide sandwich break at 10am every day.

But, of course, sandwiches are not a good reason to keep your children home.

Naomi Rivka cried when I told her this morning that she’d be going back to school in September, even when I tried to couch the decision in terms of the shiny new rolly backpack she will acquire for Grade Three.  She said, “I can’t.  I can’t go to school.”

And GZ?  Well, he probably just ran around continuing to knock things over.  I doubt he noticed I said anything.  He won’t notice he’s miserable until halfway through the year when the same kids who weren’t his friends in gan are still not his friends in Kitah Alef.

I hope I don’t sound too pessimistic.  There are things to look forward to this year.

When we moved to Israel a year ago, there were three reasons we decided not to homeschool in Israel.

Even though we’re a year into our Israel adventure, all of those things are still true.

With all of that hanging over us, we made the hard, hard decision to put the kids back in school for the coming year.

Tomorrow, I get to go to two city halls to deal with the paperwork.  Oh, joy.  Oh, bliss.

Today, I emailed the kids’ new schools to lie to them and apologize that I hadn’t contacted them sooner.  I said in the email (in Hebrew), “we hadn’t yet decided which school was appropriate for our children.”  The truth is more like, “we really, really wanted to keep them home.”  More than anything.

By next year, they may have friends; definitely lots of Hebrew, and who knows… we may actually have money coming in.

I’m telling myself this isn’t a defeat.  We can still do cool stuff.  We can still learn English after school.  We did last year, a little.  Maybe there won’t be time for French, Latin, History, and all that other fun stuff, but we can focus on the most important things.  We won’t have to learn math; they’ll get that at school.

And this isn’t all bad.  They’ll also get some simply awesome things, just by being in school in Israel:  assemblies and holiday programs and events, high-quality davening and Torah learning experiences, and a Jewish atmosphere that simply doesn’t exist anywhere else in the world.

They both had experiences last year, through school, that I truly envied them.  Most importantly, I envy them the experience of growing up as Israeli kids, in Israel.  They will know the songs, the language, the country, on a level that we grown-ups never will, no matter how strenuously we study.  They will belong here.  They will leave us in the dust, as all immigrant children eventually leave their immigrant parents in the dust.

I hope that, by next year, we’ll be ready to homeschool here.  It’s nice to have a goal.  But kids being kids, every month we delay, we run the risk that their goals will be different from ours.  By next summer, if all goes well (school is great!  amazing friends!  terrific teachers!  fabulous learning!), school may be such an appealing option that they will balk at the thought of “having” to homeschool again.

(Of course, if they make that decision, I will support them without hesitation.  That’s what educational choice is all about, after all.)

So that’s a chance we have to take.  Not without fear, and not without sadness.

And making that decision last night, I felt like I was sentencing myself.  Two more weeks, and then I have to hang up the homeschool hat again.

Hang it up… but hopefully, not retire it for good.