“When you interrupt a girl’s school day” – seen on Facebook 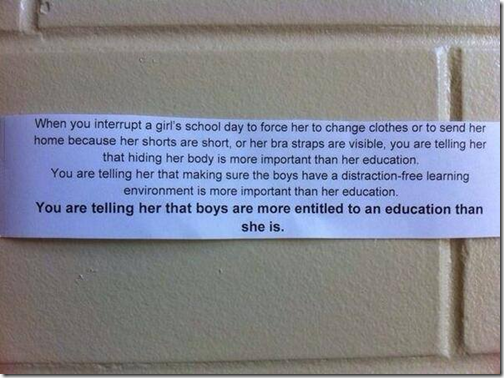 Agree or disagree?  What do you think of this message that’s been floating around for a day or two on facebook:

Doesn’t it depend on what you’re telling the boys?

And doesn’t this presuppose that there are boys in the school in the first place??

What are you telling the boys?

My daughter went to school for 12 years where she could be sent home if she was inappropriately dressed.  But then again, so did my son (albeit, at the end, to a school with slightly different standards – I have to include this disclaimer in case one of them should come across this post).

In Hebrew, there is a strong difference between the word “haskalah” (הַשׂכָּלָה), which means “education” and the word chinuch (חִנּוּךְ), which means… whoops; “education.”  A school, it is said, provides haskalah, which generally means something more like intellectual enlightenment – the content of what is taught in lessons.  But it should also provide chinuch – the kind of education in civil behaviour into which how we dress – and the message it sends – generally falls.

This message is apparently being shared on facebook as part of something called the “@unslutproject,” which aims to remove stigma and shaming of women who dress or act in certain ways.  I certainly agree that we shouldn’t shame people or treat them badly, no matter what their gender or how they’re dressed.  That’s part of civil behaviour, too.

It is interesting, by the way, that we assume that the biggest distraction here is to the boys (assuming they are there in the classroom at all).  Have you ever noticed how distracted young girls act when their bodies are on display?

If a girl’s bra strap is showing, did it get that way by accident?  Maybe… or maybe she knows it, planned it that way, and is thinking about it constantly during history or English or whatever class she’s supposed to be concentrating on.

And by the way, if you remove the boys from the classroom, there’s some evidence to suggest that the girls do better, educationally.  Does that mean, since we care so much about their education, that we ought to sequester them in single-sex schools, where they won’t have to fiddle with their bra straps, hemlines, or anything else unless they want to…?

Well, the choice is up to you, but that’s what we did with our daughter.

Neither gender is more or less entitled to an education.  But since their bodies are coursing with well-documented crazy hormones during the years between 13 and 18 (probably longer), it seems to make sense to both set dress codes AND separate them during these years.

I can’t guarantee distraction-free (see above re crazy hormones).  But yes, it’s fair to say that boys are entitled to a learning-conducive learning environment… and so are girls.  Since each is the other’s biggest distraction, it just makes sense to keep them apart.  And appropriately dressed.