Just the folks you want all up in your seder business… the ever-scandal-rousing Huffington Post brags this week that New Haggadahs Offer Unique Passover Experience For Every Seder Table.  In this case, they’ve decided to mix in where they’re not wanted by stirring up the pot and dishing up 25 “new” Haggadahs.

Now… before you get all riled up at me for being reactionary, please know:  I am all FOR new haggadahs.  In fact, I personally buy a new haggadah every single year.  (At least one!)  So I totally love new haggadahs.

There are haggadahs that are all about Pesach, and then there are haggadahs that are all about other things – fair trade, for instance, or vegetarianism.  A few people this year (through facebook) tried to get me interested in connecting the idea of agunot (women whose husbands refuse to grant them a get, a halachic divorce, meaning they can’t remarry) with the liberation of Pesach… but I held strong.

It’s not that there aren’t other important issues.  But for one night, the seder night, I believe the focus should be on Pesach.  Plain and simple:  the story of bnei Yisrael leaving Mitzrayim and its emotional, psychological and spiritual ramifications.

There is also an argument that focusing on another issue helps make this old, old story of Pesach “relevant” – fulfilling the idea that every person should see him/herself as if he/she personally left Mitzrayim, which is very difficult for us today.  To which I say, really?  Like if you cannot see pictures of modern-day slaves in shoe factories in China, you will have no concept of slavery, and no understanding of what it meant for Hashem to free us back in Mitzrayim?  Well, okay, then.

Here are some of the “distraction” haggadahs I spotted, kind of randomly, in the Huffington Post list (all descriptions are from their site, not by me!):

#6, Vegetarian Haggadah.  While many Haggadahs are vegetarian-friendly, the Haggadah for the Liberated Lamb is distinctly focused on vegetarianism and animal rights. Meat is never mentioned, and in its place are traditional veggie dishes your ancient ancestors might have eaten.

#9, LGBT Haggadah.  The Pride Freedom Seder Haggadah is an LGBT-friendly Haggadah dedicated to gender and sexuality equality. It is also a sober affair, substituting wine for water in solidarity with those in recovery.

#14, Humanist Haggadah.  This Humanist Haggadah invites Jews and non-Jews alike to participate in the Passover festivities. It highlights Passover as a celebration of life and uses the rebirth of nature in springtime as a parallel story of liberation.

A chocolate seder?  A Unitarian seder?  Not all the examples are this extreme, but almost all of them are about something other than Pesach, in my opinion.

I asked a few friends on facebook (okay, I asked everybody; a few bothered to answer).  Here are their recommendations:

There are also a few weird new “novelty” haggadahs every year.  Here are two that jumped out at me… in both cases, somewhat literally.

As for me…Did I buy a new haggadah this year?

Darn tootin’ I did!

I already own Jonathan Sacks’ original Pesach haggadah, which features a (good) translation by Shlomo Riskin, alongside divrei Torah by Rabbi Sacks.  But this year, he released The Jonathan Sacks Haggada, which apparently features his own translation and a nice new cover.  Call me a sucker but as a stranger in a strange land (albeit my own holy land), I wanted something reassuringly English and familiar, and Yiddishkeit doesn’t get much more English than Rabbi Sacks. 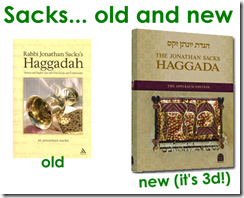 (I hope there’s not too much overlap between the old haggadah and the new one.)

What about you?  Will you be buying a new haggadah – or have you already bought one?  Do you have an old favourite you’d like to recommend?  Feel free to drop it in the comments section below!

Also… to help you get in the Pesach mood, instant-download your copy of my PDF Pesach / Passover Lapbook over here at CurrClick.

Or this FREE printable “On Pesach” Passover mini-book (grab it free over at my kids’ books blog).