The story of Rus and Naomi – narratable version (in 3 parts) 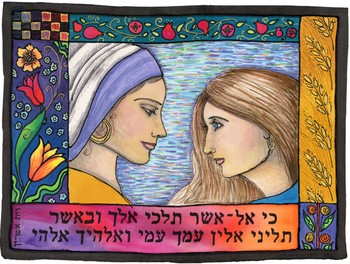 I’ve broken this complex story down into 3 sections so that you don’t have to do the whole story at once.  Eeach section can be read and narrated back, and the child can even draw an illustration for each section.  You can do this at the same time, one after another, or on different days/times, depending on the child’s patience and ability.

This story actually from my Shavuos lapbook, so I figure many people may not have seen it yet.  I believe I adapted it (it doesn’t read like my own writing), but I’m not sure exactly from where.  Of course, you don’t have to read my exact version, but you can.  :-)

(also, there are a couple of errors in the lapbook version which I have corrected here)

Section 1: Read this section, then and have the child narrate back whatever he/she remembers.

The Megillah of Ruth begins with a famine in Eretz Yisrael. Elimelech and his wife Naomi and their two sons, Machlon and Kilion, left Bais Lechem to live in Moav.

Elimelech fled from Bais Lechem not because he was hungry — he had more food than he needed. He was very wealthy. He was afraid that poor and hungry people would come knocking on his door for help. But Hashem expects wealthy people to help poor people, and Elimelech was punished for not doing that: he died in Moav, leaving his righteous wife Naomi a widow.

Having lost her family and her fortune, the righteous Naomi set out back to Bais Lechem. She kissed her daughters-in-law Ruth and Orpah goodbye. Orpah went back to Moav, but Ruth clung to Naomi with a fierce loyalty, saying: Wherever you go, I will go; where you lodge, I will lodge; your people are my people and your G-d is my G-d; where you die, I will die, and there I will be buried (1:16-17). Naomi and Ruth went back to Bais Lechem, where they strugged, living in poverty.

Section 2: Read this section, then and have the child narrate back whatever he/she remembers.

Young, vigorous Ruth cared for the sad, bitter Naomi.  Every day, she went out begging and scrounging in the fields, gathering leftover grain and whatever she could get to eat. There, she met Boaz, whose wife had just died. Boaz saw Ruth gathering fallen sheaves in the field, and he admired her honesty and modesty, not to mention her devotion to Naomi, his relative.

Naomi hoped that Boaz would fall in love with Ruth and “redeem” her in marriage.  If she could have a child, perhaps Machlon's memory would live on. But then, after a while, the harvest was over and it didn’t seem like Boaz was going to take the first step by asking Ruth to marry him.

Naomi feared that since Boaz had not offered when Ruth was near, he was never going to think of marrying her once she was out of sight. But why would the wealthy Boaz marry a poor Moavi girl, even if she had once been a princess? Naomi could not simply ask him to redeem and marry this girl!

Section 3: Read this section, then and have the child narrate back whatever he/she remembers.

Naomi realized that she must be bold, or Boaz would simply forget Ruth and marry someone else. She decided that the best way – though it was daring and uncommon — was for Ruth herself to approach Boaz privately and remind him of his responsibility to the family of his dead uncle, Elimelech. She hoped that when Boaz saw how sincere Ruth was, his compassion for her tragedy would surface. And it did.

But Boaz said there was another, closer relative who had to be given the chance to marry Ruth first before he could marry her. They asked the man – the megillah does not say his name – and he said “no, I don’t want to marry Ruth” – so she was free at last to marry Boaz!

Boaz did marry Ruth and they conceived a baby, who was also called “Naomi’s son” because she’d helped bring Boaz and Ruth together. That baby was Oved, father of Yishai, the father of David HaMelech, the first king of the royal family of Israel—the House of David from which Moshiach will eventually come to return Israel to its greatest glory.