What a fun guy I am: yeast (& bacteria) experiments!

In all the years I have been playing with yeast and homeschooling, I have never, ever thought to mix the two!  Luckily, Ms Frizzle did, and last month’s Magic School Bus science kit was all about bacteria and fungi.  Oooey gooey fun!

Anyway, you don’t need anything fancy to do this – it takes less than 5 minutes to set up, though you’ll need something to substitute for the test tube to fit the balloon onto.  Maybe a water bottle?

(Oooh, ahh… look at that inflation!)

If you want to make it an experiment, rather than an observation, you could do one of two things (or both at once, if you have four test tubes / water bottles / balloons – just label everything well):

Keep in mind that I’m not a scientist.  REALLY not a scientist, as in most experiments around here fail.  Like this one, from the same kit, wherein we have successfully “proven” that clean hands carry more bacteria than dirty hands (upper petri dish):

(the lower dish demonstrates that toes are the dirtiest of four body tested parts, with arm skin being second-dirtiest.  Hair and tongue haven’t grown out anything yet)

These kits are a monthly subscription, purchased through Homeschool Buyers Co-op, that is a trifle cheesy but I figured it might give a bit more “teeth” to our science this year, experimentation-wise.  They deliver an envelope to your house every month featuring Ms Frizzle and the kids walking you through five or so “experiments,” many of which are NOT experiments at all.  So I call them “explorations,” like I do with all our other science activities, as I’ve explained before.

(I’m sure this material is heavily protected by copyright; reproduce on peril of severe punishment by The Friz)

For instance, the first “experiment” this month was making the agar and filling the petri dishes in which you are supposed to grow the bacteria.  Which is not an experiment!  Because we know how it works, there are no variables, no data, no nothing.  So they’re explorations.  If you think of it as paying a ton for two petri dishes, a test tube, some yeast and a balloon, it’s a massive rip-off, but if you think of it as “not having to hunt for a balloon and shop for two petri dishes and a tablespoon of agar” then it’s a lifesaver.  All depends where your priorities are, I suppose.

(Sadly, the Magic School Bus package isn’t available right now (linking ‘cuz it may well be available in future) but the company that makes it, Young Scientists Club, has another deal on there, if you’re interested.  I haven’t looked at the price.)

The Magic School Bus science club was a 12-month subscription deal, which I think runs out soon if it hasn’t already.  There’s a different topic each month:  magnets, dinosaurs & fossils, human body and more (full list of topics).  Most of the packages are still here unopened because we have only gone through a few of them, maybe about one every OTHER month?  But that’s fine, because most of them don’t contain anything time-sensitive, so we can go through them in whatever order we want, and take as long as we want to do it… well, given that we’re only here for a few more months.  (Eek.  Don’t want to think about it.) 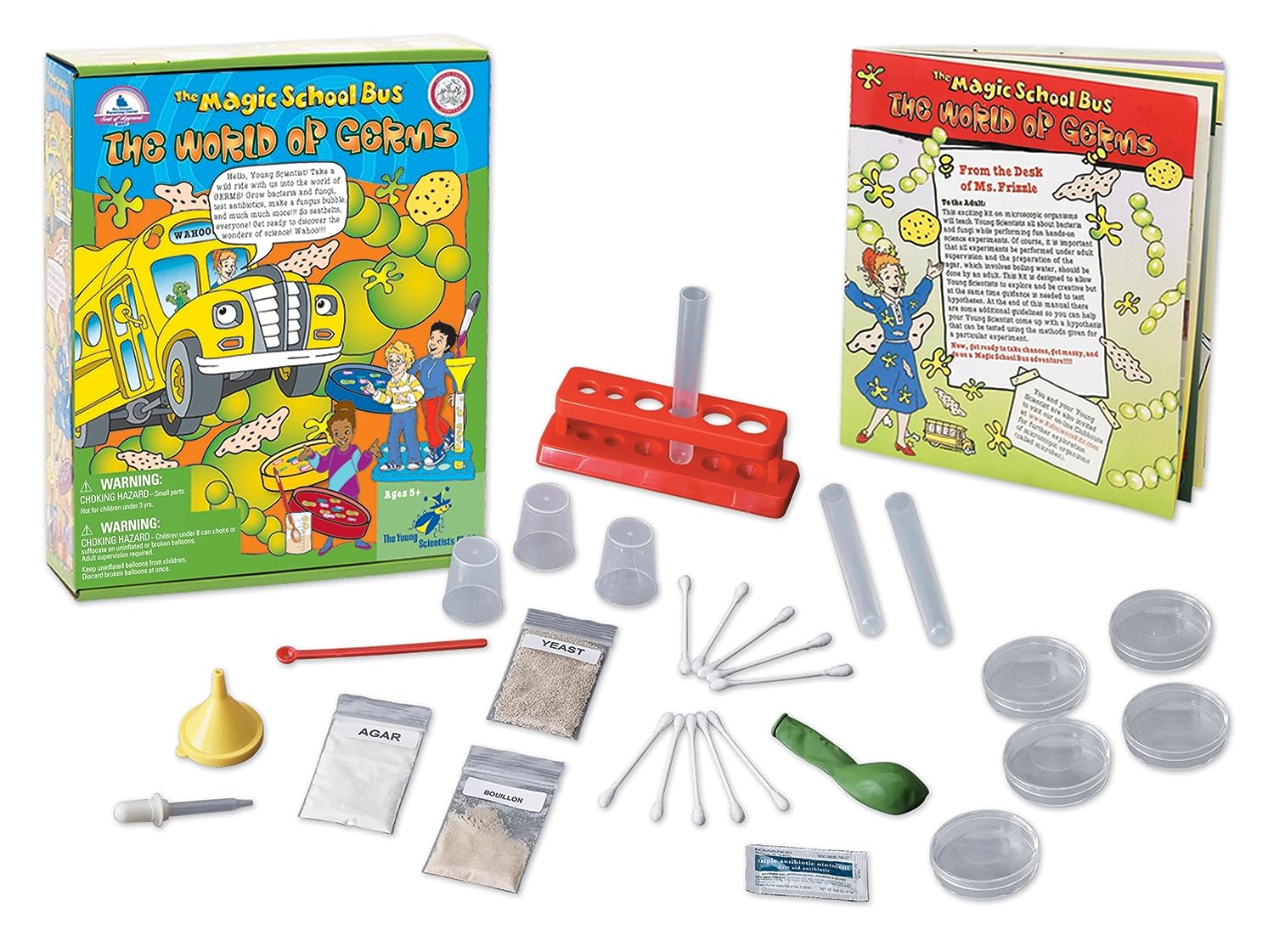 These monthly mailings are different from the Magic School Bus Science Kits available at Amazon and elsewhere (Germs Kit seen at left).  There’s probably some overlap, but those kits seem to contain a lot more items and are probably less cheesy.  You can also buy just the topics you want there, though the cost is higher per kit.  However, check the reviews, because it’s my understanding that the quality can vary a lot between kits.

Would you ever resort to a kit to make sure science “gets done” around your homeschool???

Oh, yeah, and what do you do when experiments go awry?