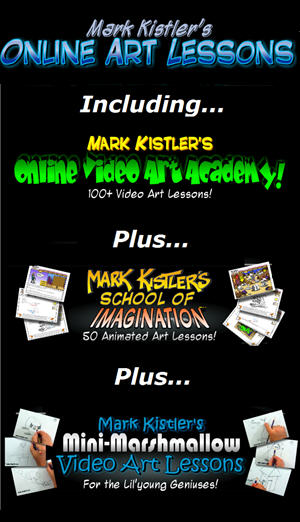 Regular readers may have begun to suspect that we haven’t “done” art recently.  By “done” in quotes, I mean, the kids are kids and continue to draw… but we haven’t done anything formal in quite a while.

Which is why I was super-happy to test-drive one of my latest free “purchases” through the Homeschool Buyers Co-op…  Mark Kistler’s Online Art Lessons.  This is a one-year subscription which gives us access to a huge library of short video art lessons.

The lessons are mainly fun, but they also emphasize shading and technique, in a simple, accessible way.  I knew what I was getting into because you can see a few sample lessons at his site here before you buy. 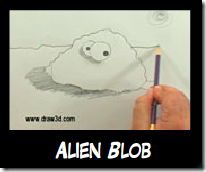 So today, I went on with the kids to give it a try.

We tried one of the “mini-marshmallow” lessons (free preview here).  We chose the Alien Blob first, because it sounded the least demanding, and I think it went very well!

Now, I’m thrilled to bits with any system that can make my drawings look halfway decent in front of my kids.  I get enough ribbing from them for my pictures that look like nothing-at-all most of the time.  Generally, I prefer step-by-step “how to draw” programs like the Draw Write Now series (see some of our experiences here).  I am well aware that nothing’s going to turn me into an artist, but the ability to draw something recognizable, even if it is totally formulaic, tickles me pink every time it “works.”

And it doesn’t always work!  Just because something is a formulaic “how to draw” program doesn’t mean it will work for me.  Some of them skip too many steps, or include “basic” shapes that are way beyond me or assume some sense of perspective.  Luckily, Mark Kistler seems to be right on my level.  Yay!  Here are our alien blobs – mine, Naomi Rivka’s (age 8) and Gavriel Zev’s (age 5.5):

Kistler places special emphasis on shading, and you can see that in all the pictures, to some extent.

The nice thing about drawing something basic like a blob is that with a little effort, it can turn out super-well – just about the best blob ever.  Working step by step with the video forced the kids to put more effort into their drawing than if I had just told them to draw a blob, or even if I had shown them.  As for me, well, there’s no way I could create a blob this detailed on my own.  :-o 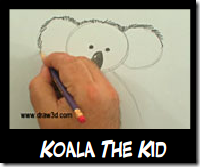 The next thing we tried was Koala the Kid, a cute little koala with a monkey on his head (you can’t see the monkey in the picture at the left).  This was a bit more of an ambitious project, but in all 3 cases, the koala turned out nicely recognizable, including Gavriel Zev’s.

In this drawing, Kistler emphasizes texture to an almost crazy extent, but the kids put up with it, and enjoyed adding the cute fuzzy texture to their koalas.

Kistler doesn’t suggest colouring any of the drawings at all (indeed, none of the impressive samples of kids’ art at his site seem to be coloured in), but I think colour completes a picture, so I encouraged the kids to finish their work in their own unique way.  In my case (far right), I “finished” mine with a hairy monster, from the bigger kids’ section of the site.  I also generally suggest that they can give their picture a name.

For families with girls, you won’t find many fairies or princesses (or any) at Kistler’s site.  Look through the offerings carefully if you’re thinking of buying, because most are geared towards the “space-aliens, creepy-critters” end of the spectrum rather than the “daisies and butterflies” end (though there are a few flowers).  I believe there’s plenty here for kids of either gender, but some girls may be turned off by the drawings’ themes.

Now – for something different.  I want to talk about links – like the many found throughout this post.

Occasionally, on this blog, I include links for things I like, and sometimes, I get credit for them.  I think that’s okay, and here’s why:

If you click through my Amazon links, for instance, then every couple of months, Amazon sends me a few bucks; it’s not much.  I’ll never get rich that way, but I have gotten a few free books.  Bought Ted a nice new watch.  It wasn’t that nice, in fact, but December 2012 was a particularly good month, and that’s what he needed at the time (actually, two or three months later).  Ditto with CurrClick (which pays me in PayPal cash), and with Homeschool Buyers Co-op (which pays in points).

So there’s the full disclosure:  if you like what you see and click the links, I get a couple of pennies or a few referral points or whatever.  If I thought about how much it was in terms of how long it took me to write blog posts, I would give up in despair, but luckily that’s NOT why I write blog posts (and it’s not because I allow myself to eat chocolate while I write, either!).

You don’t have to click the links, and I will still love you either way.

Now, this Mark Kistler art class deal wasn’t cheap – in cash or in referrals.  It costs $40, down from $100 full price.  You’d have to refer about 40 people to HSBC to get the subscription for free.  But over the last few years, those numbers have added up more quickly than you might think, and you get more points if someone you referred buys something.  There are other ways to earn points as well. Indeed, I was actually able to rack up enough referral points (they call them SmartPoints) to earn another subscription this week as well (I bought the Mark Kistler one a couple of months ago).  That one was for The Happy Scientist, a website of science videos that I like because they go beyond the cartoony quality of most kids’ science videos, without losing their accessibility and friendliness, thanks to the enthusiasm of the scientist in question, Robert Krampf.

I actually think that one is pretty affordable, at just under $10 (half price) for a year, but then, I will be honest and say once again that I didn’t pay for it, last year or this year.  I believe this would be an even better value if you were either more into science than I am or had bigger kids who could watch the videos on their own.

In case you were wondering, by the way, my kids never know which homeschool programs or products I have paid for and which were free.  I try not to let the amount of money I’ve sunk into something bias which ones I encourage (read: push) them to do.

I have paid good money for homeschool things (particularly online) that they’ve hated, and not forced the issue; we just dropped them.  On the other hand, some of the freebies have been among their favourites, and I don’t force that issue either, just (mainly) let them do the things they like best.

Still, to some extent I feel bad about shilling for these companies.

On the other hand, we are a homeschooling family of six just barely getting by on one income.  I do believe that whatever products or subscriptions I link to are reasonably good.  And in the case of HSBC, I really appreciate the way that it helps me supplement my kids’ homeschool experience with “premium” resources for free.  I also like the fact that in none of these cases do I know who is clicking on the links.  It might be you!  Or maybe not.

A final word of caution:  as with anything else online, your mileage may vary.  Try online products as much as possible with your kids before you buy.  But if you click my links, I will love you forever.

Well, actually, either way:  if you read my blog, I’ll love you forever.