Take a picture of ME! (math happiness)

I was snapping pics of the lapbook to share here (that’ll be my next post) when GZ said, “Take a picture of my work!”  I said, “your Mathematical Reasoning?”  He said yes.  He loves this book; I’ve written before about how it has saved his math year, and I stand by that.

[All school has been suspended around here this week except a) Pesach learning, which is mostly via the lapbook, and b) math, because otherwise, it’ll be another 2 weeks before we get to it, and I don’t like to have that long a break.]

As I said before, I was fully prepared to hate this book, and did, in fact, dislike immensely th

e one I got for Naomi Rivka (oh well).  You may like it very much, so don’t let my experience with it bias you.  By the way, I noticed when I put in this cover picture that it says Age 4… and yes, Gavriel Zev is 5.  Still – for better or worse, we are homeschoolers and that gives me the flexibility to let him work at his own level, without worrying overly much about catching up.

(but his math weaknesses are one important reason I have decided to hold him back into kindergarten when we move to Israel next year – the language barrier is another, plus the fact that it’s not unheard-of to have a 6-year-old in kindergarten)

This book is very repetitive in style – if it was for me, it would make me crazy..  There’s generally one quick-and-easy question or set of questions on each page.  And it’s a big, THICK book. 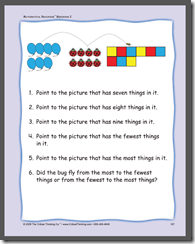 , which means you’re going to sit through many MANY of the same thing.

Like I said, it would make me crazy.  But Gavriel Zev absolutely adores the predictability of it.

This book also seems to address his main math weakness, which is that he is still having to count numbers in groups, sometimes over and over.  I think he can identify groups of up to 3, and maybe 4, but if it’s anything higher, he has to count.  There are many other concepts that he DOES “get”, but it’s very hard to move on when you’re missing something so foundational. 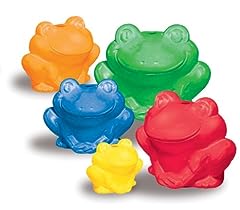 Because I don’t think math should be entirely workbook-based at this point, especially when there’s a specific problem, I have also been using our math frogs with GZ this week.  I’ve had them out a lot anyway for Naomi Rivka, who is practicing division.

With the frogs, we practice counting and grouping according to colour and size.  I also have him do basic division problems, like giving him six “kid” frogs and three big “counsellors” and having him divide up the kids so each counsellor gets the same number [he went to March Break camp last week, so this is fresh in his mind].  So I’m trying to keep it concrete as well as helping him make the leap to abstraction, and I think the book is helping, even though it’s slow going.

Also, I know this post isn’t about Singapore, but since I mentioned that Naomi Rivka was working on division:  I absolutely love the way her Singapore books (Singapore Primary Mathematics 2A US Edition – which I chose because it’s a bit cheaper, and I skip the sections on non-metric measurement) introduce division fast on the heels of multiplication.  It’s a little surreal seeing a second grader producing “fact families” of multiplication and division, but the way they introduce it so concretely, it’s not scary at all.

Okay, now I have real work to do – just wanted to share some moments of math happiness!

Postscript:  in case you’re interested, Naomi and I made these 2 math videos: