This is a basic overview of the parsha story in a format that can be adapted for a wide range of ages. Sources include parsha text, commentaries and midrash.  When introducing midrash or other non-pshat elements, I  use the words “some people think” or something similar (find out why).  If you find these overviews helpful, or if there’s a typo, or something is confusing you or your kids, I’d love to hear from you.  Pwitty Pweez? 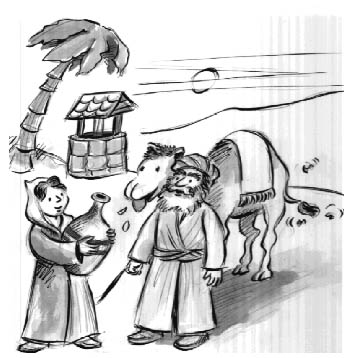 Avraham and Sara were very old by now…!

At the end of last week’s parsha, a malach stops Avraham at the last second from killing Yitzchak. This week, the parsha starts by telling us that, Sara died – left to be with Hashem in shomayim. Some people say she actually died from hearing that Avraham had brought Yitzchak for a korban. Other people, though, think she lived for years afterwards. When she dies, the Torah says her age strangely – instead of saying, “she was one hundred and twenty-seven,” it says she “was one hundred and twenty and seven.” Some say that means even though she was over 100, she was as innocent as a twenty-year-old and as beautiful as a seven-year old. One story about Sara is that when she was alive, her Shabbos candles stayed lit all week long, filling the tent with joy.

Have you ever been to a levaya (a Jewish funeral)? It’s a very sad and solemn time.

Somebody usually stands up and talks about the person who’s died. That’s a hesped – in English, a eulogy. Sara is the first person to ever have one. Avraham stands up, weeping, and talks about her, how hard she worked, how he’ll miss her. At a levaya, we bury the dead person’s body – where would Avraham bury Sara? Nearby is a field with a cave. The field belongs to a man named Efron. “Please,” Avraham begs. “Sell me this field so I may bury my beloved wife.” Efron says, “Take the field – it’s yours. Have it for free.” But Avraham hesitates. He wants to pay, so nobody can ever say it isn’t his. Plus, he knows Efron might cheat him, so he asks again how much money he should pay. Eventually, Efron says, “Four hundred shekels.” That’s a LOT of money! But Avraham pays him as much as he’s asked, and buries Sara there.

That was a very special cave – called Me’aras Hamachpeilah, the Cave of Doubles.

Why did Avraham pay so much money for a field with a hole in it??? Some people say he could smell something special, deep within the cave – the smell of Gan Eiden, because Adam and Chava were buried there. One reason it’s called Me’aras Hamachpeilah is because the two of them, plus all of our avos and imahos (ancestors) except Rachel, would eventually be buried there. If you remember the parshiyos from last year, can you name all the doubles? (Adam & Chava, Avraham & Sara, Yitzchak & Rivka, Yaakov & Leah – oh, and maybe the head of Eisav!) To this day, we still know where it’s located, near Chevron in the city of Kiryat Arba. Many people will go there to daven this week for parshas Chayei Sara!

Now, Avraham is alone with his servant, and he had a problem.

Yitzchak has no wife, and he’s still mourning Sara’s death. Everybody around them is doing avodah zarah and Avraham wants a wife for Yitzchak who will help him create a proper home. So he calls his servant, Eliezer, and sends him to the city where his brother lives. When he arrives, Eliezer doesn’t know how he’ll know if he’s found the right woman, so he makes up a test. He says to himself, “I’ll wait here until the girls come out to get water from the well. If a woman says to me, ‘Drink, and I will also give your camels to drink,’ then I will know she’s a perfect tzadekes, the right wife for Yitzchak.” The minute he finishes, a beautiful young woman comes out and opens the well to draw water. Seeing Eliezer, a stranger, she says, “Drink, and I will also give your camels to drink.” And she does – all ten of the camels. Do you know how much a camel can drink? That’s a LOT of water. Eliezer is amazed! Her name is Rivka, and he gives her jewellery, then follows her to her home, where he tells his story to her father, Besuel (this is the son of Avraham’s brother Nachor), and brother, Lavan. They ask Rivka, “Do you want to go marry this man, Yitzchak?” She agrees.

Things were different in those days: she’s never seen Yitzchak in her life, but still agrees to marry him!

At the end of her long journey, Rivka, riding on a camel, comes close to where Avraham lives and sees Yitzchak out in the field, davening Mincha; she knows there’s something special about him. “Who’s that man walking in the field?” she asks. “That is my master, Yitzchak.” She covers up her face. After they’re married, Rivka lives in Sara’s tent, such a tzadekes, they say, that her candles stayed lit, brightening the tent all week long. And Yitzchak begins to feel less sad at last.

After Yitzchak is married, Avraham, too, finds a wife.

The Torah says he marries a woman named Keturah, but many people, like Rashi, say this is just a different name for Hagar, the Mitzri wife Sara sent away in last week’s parsha. It’s easier for men to have babies when they are old, and Avraham has six more sons with Keturah before he dies at 175 years of age. But the parsha says something interesting: “All that he had he gave to Yitzchak.” Yet in the very next line, it says that to his other sons, “Avraham gave gifts.”

What gifts could he give them, if he’d already given “all that he had” to Yitzchak???

At the start of Avraham’s journey, Hashem promised him a land, and children; He said Avraham would become a “bracha” – a blesser, filling the world with Hashem’s message. Avraham was a wealthy man, with lots of servants and donkeys and gold and silver. That was the “stuff” he gave to these six new sons and to Yishmael, his son with Hagar. What he gave Yitzchak was BETTER than gold and silver: those promises, and the bracha – the idea that wherever he went in the world, he would spread bracha and Hashem’s light. Avraham passed those things on to Yitzchak, who would pass them on to his son – or at least, to ONE of his sons, as we’ll see in next week’s parsha…

Have a great week!!!