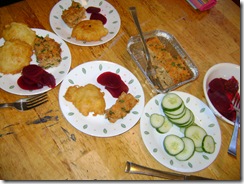 This is the time of year I jokingly refer to as our “semi-empty nest.”  The big kids are in Calgary visiting family, and we are left with a taste of what it would be like to be a totally different family – a fairly predictable life with two kids, no schools, nobody popping in and out of the house.

This period when they usually comes after several crazy unpredictable summer weeks, and this year has been the most crazy and unpredictable of all, with big kids running in and out of the house, up to all kinds of big-kid shenanigans, at all hours of the day and night.

Literally, at any moment if we’re trying to do school or have rests or anything, the door could open with a big kid bursting in, perhaps happy and calm; or perhaps, agitated, angry and shouting.  And there is always money:  they constantly need money, infusions of cash or arguments about money or debates about who owed what to whom and when.

So when they go away, it’s a bit of a release.  A bit of missing them terribly.

It would seem like food would be simpler.  Not only two fewer people, but the two biggest eaters in the house.  They don’t just eat at mealtimes, they GRAZE constantly, sweeping through the kitchen and eliminating crackers, cookies, chocolate chips, in their wake.  Fruit, too; they’re not unhealthy eaters by nature, though veggies tend to require too much attention span with all the peeling and cutting.

I often joke that I’m a bad Jewish mother because I’m always yelling at the kids NOT to eat.  They probably don’t think I’m joking.  I do worry that they’re not eating, but the snacking (I call it fressing, just to make them crazy!), the grazing, doesn’t reassure me; it tells me they are constantly hungry and there’s nothing I can do about it.

I worry less about hunger when they’re away.  Hand out drinks a few times a day, cut up an orange or a peach, dish out two little bowls of pretzels or boxes of raisins, and everybody’s happy for a few hours.

I worry less about meal planning when they’re away.  They grew up eating a variety of nice flavours and styles of food, but right now, they seem to reject anything off-hand, even if they’ll later wander in and happily sit down to eat it.  Except chicken, which neither of them like very much.  I made it once a few weeks ago and YM grudgingly said the way I’d done it (I forget) was his “favourite way to eat chicken,” which the way he said it, sounds like “my favourite way to contract Ebola,” so I “excused” him from eating it, by which I meant that he was not allowed to eat until he apologized for insulting my cooking.

Life is very easy with little kids.  With no big kids around to tell them what they don’t like, their minds are more open.

“Is there any plain pizza?” Naomi asked tonight (more about the pizzas here).  I gave her my standard line:  “Yes.  There is plain with veggies and plain with fake crab.”  She happily finished off two slices of plain-with-veggies, pushing the veggies off but “saving them for later,” and her food was completely finished by the time she left the table.  Gavriel Zev had one slice of each and even bravely kept on eating after getting spicy-mouthed with a bit of homegrown “warm pepper.” (not hot enough to count as “hot pepper”)   He just took a big, BIG, drink and kept right on eating.  (I suggested he remove the pepper bits if he did not want any more heat)

And the quantities, seemingly, are easy.  The picture at the top is of a tiny, miniature salmon loaf, a recipe that is actually called Salmon Loaf for Two.  I baked it up in a little teeny dish and served it out (with corn fritters and home-pickled beets) on little teeny side plates, and it was just like playing tea party except everybody was full at the end of the meal.

Except… even the quantities are tricky.  We had maybe a dozen leftover corn fritters – my regular beer batter recipe is too much for a small family, apparently.  And the pizzas tonight:  it felt wrong making “only” two, but sure enough, leftovers again.  I worry there won’t be enough; I can see this becoming a problem in my old age.

Complicated is okay.  It is what it is.  If I point out any of this in any place other than in a blog post, like if I suggest that the smaller kids watch them to see how to react, the big kids object with mighty sighs and groans and eye-rollings.

Maybe every parent should get a blog and every kid should read their parent’s blog (parents’, if both have one).  And maybe vice versa.  Not discuss the posts at any time, but just – get to know one another, without feeling the need to stop each other from snacking or oppressing or whatever it is we do to one another.  Cyberspace is so clean – no dirty dishes or laundry or missing scissors to kvetch about; just souls getting along fine. I have always vaguely fantasized about becoming a brain-in-a-jar, pure mind (bear with me here – I know this is not Hashem’s intention and I know this is not our ideal state, but if Ted can fantasize about the coming zombie apocalypse, well, just play along…)

So now I realize that maybe it would be better if we could ALL spend a month or so “away” in cyberspace, brains in jars, respecting each other, getting along just fine away from all the laundry and toilet paper.

But eventually, I’d want us all to come back so I could hug them and smell them and be close to them.  As hateful as we all are to one another, they are my children, and it’s reassuring to have them close.

Plus, three weeks of semi-empty nest adds up to a TON of leftovers that somebody has to come back soon to finish off…