This is a basic overview of the parsha story in a format that can be adapted for a wide range of ages. Sources include parsha text, commentaries and midrash.  When introducing midrash or other non-pshat elements, I use the words “some people think” or something similar. (find out why)

Please see the Vayeishev overview for how we use these narratives  in our homeschool.  I also have copywork sheets to go with the weekly parsha… enjoy!  (um, okay, not one for Pinchas yet, but maybe tomorrow)

Hashem wants us to be VERY careful choosing our words!

You promised your best friend he can borrow your bicycle tomorrow, and he’s so excited! But when you get home, your family is packing for the cottage and bringing your bike along. The next day, your friend waits and waits and waits… and you never show up. He’s disappointed – you broke your promise! This parsha reminds us how serious it is to make a נֶדֶר / neder, a vow. We try not to make promises, in case we can’t fulfill them.

Unlike a person, Hashem always keeps His promises.

Remember in last week’s parsha and before, when the people of Midian called Bilam to curse the Jews, and then sent their women to marry the men of bnei Yisrael? Well, Hashem remembered, too. Now, he told Moshe it was time to fight against Midian, to avenge everyone who had died. After that, Hashem said, it would be time for Moshe also to die.

A thousand soldiers came from each shevet, led by Pinchas (remember him from last week?)

(With twelve shevatim, how many soldiers did they have altogether?) They killed five kings of Midian, plus the wicked Bilam. But the soldiers made a mistake – they killed men, but left women alive even though the women had also attacked bnei Yisrael. Hashem said they must die, too. Only He knows what everybody truly deserves.

The battle was successful; they brought home riches, and not even one soldier died.

But that’s impossible! In most wars, many soldiers from both sides die before the fighting ends. But here, Hashem sent bnei Yisrael to war, and protected them. The soldiers realized right away that Hashem had helped them, so they decided – nobody even had to ask – to bring every gold thing they brought back with them to the Mishkan, to thank Hashem.

Now everybody was getting ready to move to eretz Yisrael.

Two shevatim, Reuvain and Gad, saw beautiful land near the river Yardein and decided it was a great place to live. Eretz Yisrael was not very big, plus they’d still be close to the rest of the shevatim across the Yardein. But Moshe thought there wouldn’t be enough soldiers to fight for eretz Yisrael. He was also angry that they didn’t want eretz Yisrael, just like the meraglim. But those shevatim came up with a plan:

“What if we leave our wives, children and animals here and come with bnei Yisrael to fight?”

Moshe said, “Okay; after the battle, you can return to your families here.” Moshe wouldn’t be leader then, so he asked Elazar and Yehoshua to make sure that Reuvain and Gad did as they said. So much of Torah is about keeping promises!

Now, in the 40 years since bnei Yisrael left Mitzrayim, they have lived in 42 different places!

Remember, Mitzrayim and eretz Yisrael are VERY close together, but Hashem said to wander until the older generation was gone. Now, almost everybody has died, so Moshe tells the new generation about their travels in the midbar.

Where do you come from? What’s your family story?

It’s fun to hear about the day you were born or how you came to live with with your family, and to see and hear about places in your family story: “look, that’s the first house we lived in together”; “that was the shul where we made your bris!” Well, the new generation didn’t see most of the places bnei Yisrael had lived, so now Moshe tells them how much Hashem loved and took care of them on the way.

Hashem had another important reminder for the people!

Eretz Yisrael is unlike any other place – it is very קָדוֹשׁ/kadosh. Do you remember what that means? (special to Hashem!) So nobody could do avoda zara there and people who did must be kicked out, their idols smashed and burnt. Hashem told Moshe to give out the land by “lots” – like rolling dice to decide who’d get which area. But He’d also make it fair: big families got more, and small families, less. Land would belong to the same shevet forever. Levi would receive cities in the areas of other shevatim. Hashem told Moshe exactly where the borders should be – almost like drawing a map of His gift to Avraham’s descendents. He also explained one more unusual thing about eretz Yisrael…

Have you ever done something really bad by accident??? 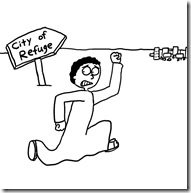 I knew a boy who was playing around and bumped into a girl. She fell over and her tooth broke; she needed a whole new (fake) tooth! That was a terrible accident – but it was an accident. He should have been careful, but he didn’t mean to hurt her. Hashem knows what we really mean inside, so He said to make special cities in eretz Yisrael for people who killed somebody by accident. The family of the dead person might be so angry they wouldn’t care that it was an accident – they might kill that person for revenge. So he could run away to an עִיר מִקְלָט / ir miklat and be safe. And just to make sure he didn’t have to stop and ask directions, they needed signs pointing the way. It’s hard to know when to take revenge and when to forgive. We make mistakes all the time… but Hashem never does!

We are now finished reading Chumash Bamidbar, so we all stand up and say together: