Does this count as a healthy (pareve) Shabbos dessert???

I forgot to blog this sooner, but happily, I was reminded by a call for posts for the upcoming Kosher Cooking Carnival.  If you blog about Jewish food, please submit your posts here ASAP!!! 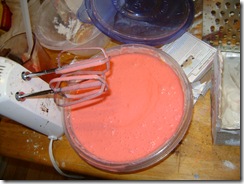 Okay, ignore the erev-Shabbos mess encroaching and the TERRIBLE colour of this dessert.   I have been trying to perfect the whipped-strawberry-Jello thing in a pareve form, either as 1-2-3-type layers or as a solid mousse suitable for sticking in a pie crust or just eating from a spoon.

At the recommendation of Shoshana at Couldn’t Be Parve, I’ve been on the lookout for the entire MimicCreme line of nut-based non-dairy creamy products, so I was thrilled when Ted found a couple of them in a local health-food store.  He brought home one of the creamy things at right, but he also brought a package of Healthy Top, a shelf-stable-packaged, non-dairy, non-soy, non-palm-kernel-oil, non-cottonseed-oil or other pareve atrocity, whipping “creame.”

Whipping instructions have changed since the package was printed, so there’s a sticker on every single one telling you to stick it in the freezer, along with the beaters (which is what I do for REAL whipped cream anyway) for a good long time before you attempt to whip it.

I was initially mystified when I opened my first package, because it looks almost solid anyway, even before you start to whip it.  And I didn’t attain any great volume increases the first couple of times, either.  However, thanks to this helpful video which I watched, fascinated, last Friday, I think I have a better handle on the hows and wherefores of whipping this product now.

In any event, when you open the Healthy Top, you’re going to see a gloppy, thick substance that looks like this: 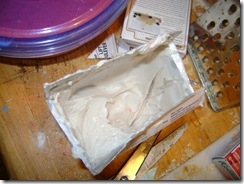 Eww… but just think about all those unhealthy things that AREN’T in it and I’m sure you’ll be fine.

You do have to scoop it out of the box, and I haven’t found a tidy way to do this… just dig right in and scoop.  I think it’s not possible to manufacture it in a tub and still have it be shelf-stable; not exactly sure.

The first time I used it, when it wasn’t whipped enough, I found the flavour somewhat overwhelming.  It’s not a bad taste (it’s made out of almonds and cashews, so there’s nothing terrible, but it was rather strong.  Again – I have since discovered this was MY fault.  Even though it already looks somewhat solid when you dump it into the bowl, you must keep whipping until you attain some volume.  Whipping air into the mixture makes it lighter-tasting and less likely to interfere with other flavours in whatever you’re making.

In any event, last Friday I wanted to use the Healthy Top to try to create a healthy(ish!) strawberry whipped-Jello confection.  The only problem being – uh-oh! – no strawberry jello.  By Jello, I mean Kolatin.  Accept no substitutes; this is the only REAL kosher, gelatin-based jelly dessert – all the others use weird vegetable-based jellying agents which are inferior in almost every way (you can use pineapple and kiwi with them, which you can’t in real gelatin because the acids digest the gelatin instead of letting it set!).

But since mothers are by necessity inventors (isn’t that the expression?), what I did have were… 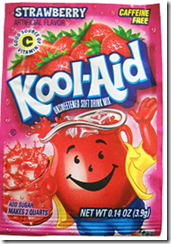 (my kids will tell you I am somewhat obsessed with artificial strawberry products – it is really the only artificial flavour I love; Ted buys all kinds of lime and cherry and orange jello and kiwi and lemonade and whatever-flavour kool-aid and I usually won’t have any of it)

So here’s what I did – and please, keep in mind that this was an experiment.  Feel free to play around; the only big worry is that if you up the liquids too much, the Jello won’t do its job and set the mixture to a nice mousse-y firmness… and then you’ll just have fluff.  Which is fine, too.  The worst case scenario, in this case, isn’t all that awful.  ;-)

Do you have any weird, semi-embarrassing Shabbos indulgences???

By the way, if you haven’t yet, please take a second to stop by and fill out my easy, one-question blog poll!