This DIY chocolate syrup is super, SUPER easy, which is my rule of thumb this year.  Stir it into milk and you’ve just saved yourself $3 on a bottle of Pesach chocolate syrup you’ll use maybe three times. 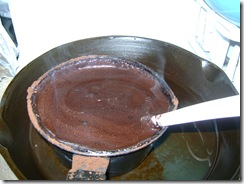 And just in case you’re a total… 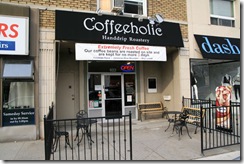 (Coffeeholic, a now-defunct sign on an ill-fated coffee place near here with a name almost as demanding, and irritating, as this one, posted by Batya at me-ander)

…here’s a recipe for a coffee syrup you can add to milk, yogurt, etc.  I haven’t tried this one yet; it’s “brewing” on the stove as I write this.

Here are cubes of homemade frozen fruit purée, to stir into the homemade yogurt, which came out VERY thin, and therefore… it’s drinkable, just the way Ted and the kiddies like.  It can also be frozen into popsicles. 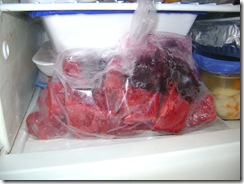 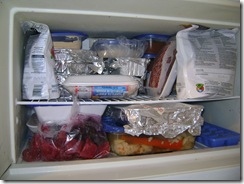 In the background are mostly various cakes and other desserty items – my staple olive-oil chocolate mousse and a less virtuous “ice cream” made from whipped topping, egg whites, a bit of sugar, and some instant coffee powder.  Oh, and some Pesach pralines stirred in, which I made with almonds because I didn’t have any pecans at the time (I do now – too late!).

And here’s the fridge – which is mostly dairy, as you can see from the vast whiteness.  Top shelf is yogurt, middle shelves are various assorted cheeses:  cream cheese, cottage cheese, etc. 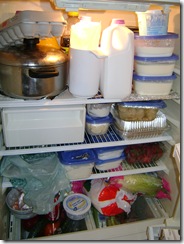 Finally, the pantry cupboard.  This looks like a lot of stuff, but it is FAR emptier than it has been in previous years.  Starting cooking ahead of time has hopefully meant that I don’t need to buy as many tinned and prepared things. 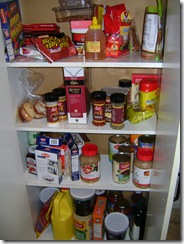 Which doesn’t mean tomorrow won’t be a panic and a crazy-mad rush.  I’m sure it will be!