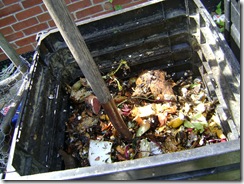 But think about it – you’re eating basically vegetables, for eight days, along with thousands and thousands (well, maybe it just seemed like it) of eggshells.  Peel, peel, peel… crack, crack, crack – and every peel and every shell is making my garden happier and healthier than it would be otherwise. 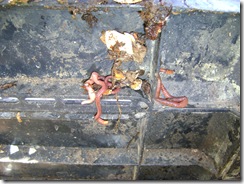 I got so mad two years ago when I saw somebody tossing Pesach eggshells into the city compost bin.  My standard line is, “we already pay taxes; do we have to give them our compost, too???!?”  The (somewhat rabidly-made) point being, it’s perfectly good stuff.  And the worms (a few pictured at right) are the very best kind of Pesach guests – the ones that stay on afterwards and help you with your gardening all year round.

In other, less delightful, more rot-full gardening news, at some point in, oh, maybe December, I noticed that the lids were missing to the two big garbage pails in which I keep dried leaves, raked up in the fall.  I usually rake them up in the fall, keep them dry all winter, and use them throughout the garden and/or in the compost come spring – because in the fall, there’s no room in the compost bins for all the leaves.

Anyway, the lids were missing and we couldn’t find them anywhere.  And I knew that, with no lids, the pails would fill up with snow and ice and the leaves would get disgusting.  Well, I told Ted, and he worked out an arrangement where he upended one full pail on TOP of the other, presumably to act as a “hat” and keep out the moisture.  Naturally, since it wasn’t sealed, it didn’t work.  And today was the day to deal with the two pails full of soggy watery rotten leaves.

The top layer was nice and dry, so I just spread that in the garden.  the rest was pretty soggy, so I thought I’d drag the bin to the backyard, not realizing exactly HOW waterlogged it was… turned out it was completely full to the top with water, and as I dragged it, the disgusting leaf-rot water was sloshing out onto my hands and shoes.  Ewwww… plus, it was super-heavy and kept hitting bumps in our driveway cement and sloshing even MORE. 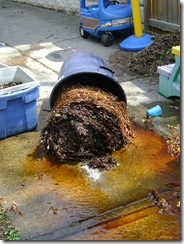 Finally, I decided to just tip the thing out right where it was.  Oy, vey – a great deluge of coffee-coloured rot-water sloshed out, all over Gavriel Zev’s feet, my feet, and threatened to run right into the garage.  I grabbed a snow shovel and started shovelling the water as fast as I could, tossing it into the garden and into the empty pail so I could spread it around when I was done.  Despite the intense REEK, or perhaps because of it, I knew this was probably the very best kind of compost “tea” that gardeners like me are supposed to go crazy over.

Throughout all this, and despite the smell, the kids kept playing happily, running around with “adopted” worms I had given them from the composter.  Naomi was setting up a worms-and-ants habitat, while GZ was taking his worm for a drive in the toy car (seen in the background here).

Later on in the afternoon, when the leaves were somewhat dry, I scattered them around on the garden paths, since all the straw I put down last year is pretty much GONE (where did it go??  it rotted!)  And as with all garden smells, once dry, it began to dissipate… leaving, I hope, the benefits of rottenness without the stinky drawbacks.

By the way, when I called the kids over to see the worms in the composter (of course I called them to come look!), Naomi Rivka made a big girly show of reacting to the smell, baking away and saying, “smelly!”  To which I said, “actually, it smells kind of sweet, don’t you think?”  Because a well-fed, well-stirred composter really doesn’t (and shouldn’t) smell like food gone bad.  And she agreed, and came back for a closer look.

Real girls, cool girls, are not afraid to smell the compost.  But I still wear gloves to touch the worms, unlike this brave IRL friend, who is also not afraid to tackle home improvement projects with power tools.  I like to leave a few frontiers unexplored.

How many worms did you feed over Pesach???