Yet another rock-bottom (Shabbos food) 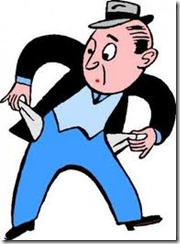 Another rock-bottom Shabbos due to the awkward, between-paycheques and bills-to-pay placement of Purim, which I like to think of as the Little Ouch next to its big brother, the Great Big Honking Painful Squeeze of Pesach.  (Tuition month, in August / September, is probably somewhere in between on this Pain/Payin’ Scale)).

So what are we eating???  Ted’s been making the menus for a while now because I lost all interest in food planning (a terrible admission for somebody who is technically a full-time homemaker).  Here’s what’s on the agenda, almost entirely “salvaged” out of the cupboards and freezer:

Hmm… not exactly starving to death, especially compared to times past… and we are very lucky in that it’s only for a few days.

But it is somewhat depressing trying to do various Purim things and birthday things without very many nickels to rub together.  Blah.

What do you-all do for Shabbos or Yom Tov… when there isn’t much money to go around?