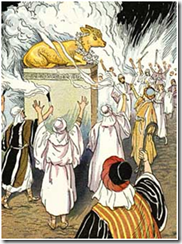 If you have something special, you love to keep count,
To show that you like it a great big amount;
Now, Hashem isn’t human, with teeth, hands, or freckles,
But he loved to count all of the Jews with half-__________!

This week Hashem tells of the last holy vessel,
A great hunk of copper with which they would wrestle;
In the merit of women who gave up their mirrors,
The __________ gave water, which cleanses and clears!

From Shevet Yehudah came the young man Betzalel,
When asked “Can you do it?” said “Yes I will!”
With Oholiav, comrade and friend, by his side,
His grandmother, __________, watched from shomayim with pride.

STUMPED?? Here are some answers:
[ 1 ] Shekels.
[ 2 ] Kiyor (washbasin).
[ 2 ] Earring.  Aharon hoped sending the men to ask for their wives’ jewellery would stall their insistence on creating the idol.
[ 4 ] Miriam.  According to some, Betzalel’s grabdfather, Chur, was married to Miriam.  Others say Miriam was married to Kaleiv and Chur was her son, making her Betzalel’s great-grandmother.